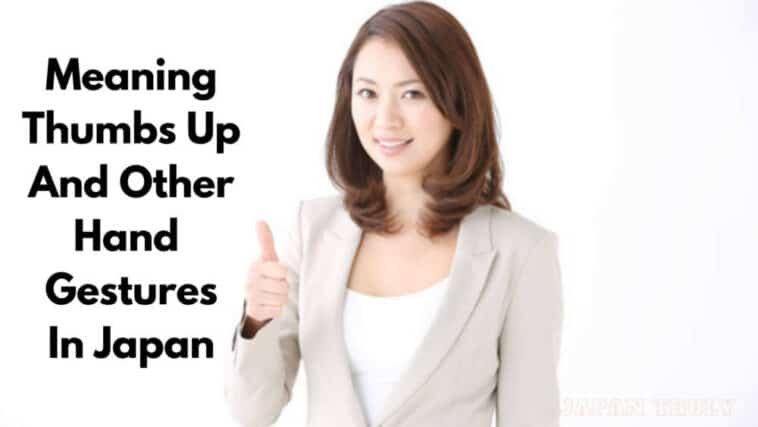 Communication is imperative but what complements effective communication involves the proper use of gestures in the right place. You might have proper body language and basic etiquette. But in Japan, it’s not enough.

If you are ever on a trip to the Land of the Rising Sun, you would know that the culture has been quite too rigid and different, might I add, when the use of sign language comes into action.

And I am sure you would like to stay out of the perplexity and get yourself a bad name in such a wonderful country.

A normal thumbs up is regarded as some kind of accord, which is pretty normal. But in some cases, it can also mean ‘a lover’, in an arrogant way.

Meaning of Hand Gestures in Japan

Meaning of Thumbs Up in Japan

The use of thumbs up and what it means is universal and quite normal. Even in Japan, a thumbs up is a mark of declaration and agreement upon something.

However, the symbol stands for something else as well, which can turn out to be a little offensive sometimes.

Thumbs up is also used to casually signify ‘a lover’. So if you are gathering for a party and you show a thumbs up to people, they may interpret something else and things might turn strange without you even realizing. So, be careful with the use of this common gesture when you are in Japan.

Meaning of Index Fingers in Japan

Unless it is a verbal cue, they would be fine but in Japan, things are different, because people even take non-verbal cues quite seriously. The same goes with the use of your index finger.

When you point both of your index fingers upwards sticking them to either side of the head like the devil horns, it might appear to you as a playful joke but to the Japanese, it might be a bit different. To them, the sign means anger.

So when you make the demon face and try to be hilarious amongst a group, make sure that your gesture might be contrasting with your intention.

There is another use of your index finger, which is pointing it up your nose. This means that you are pointing at yourself and holding yourself accountable for anything that is happening across the table.

Usually, we all point toward our chest for such a kind of action but as mentioned earlier in the article, Japanese people have their way of doing everything in their distinct style.

So next time a person touches or points to his nose, you will know that they are not odd but pointing to themselves.

People across the world have different ways to greet each other. Western people would prefer going by a firm handshake, and hugs for friends and family.

In the east, everyone is so cultured that they have their concept, the Indians go by joining their hands and saying ‘Namaste’, while in Japan, people bow. Bowing is an indispensable part of Japanese culture, something that they are renowned by.

People in Japan not only greet but say sorry, thank you, excuse me as well as a goodbye when they bow. Even with friends and family, rather than shaking hands or tugging them in for a hug, they prefer to bow.

And remember, there is only one right way to bow. Japanese people may also take offense if they find you mocking their culture by not doing it the right way. The bow is always preceded by a tall stature. So make sure you stand straight before bowing.

You bow to a certain level and do not just go right away. A good bow requires you to stand back up and smile so others know you acknowledge them.

Meaning of Pointing Finger in Japan

Unless it is an inanimate object or yourself, Japanese people have no problem with you pointing fingers. But there certainly is a problem when you point fingers at someone else in Japan. This can be demeaning to the other person and even yourself.

Whereas in the western culture, pointing fingers at each other while you are having a conversation has become so normal that one might not bother. But do not be surprised when you are pointing fingers at someone and you do not get their eyes rolled on you.

People in Japan believe they have a social value to maintain, both intimately and in public, so they ensure that they do not get embarrassed in both states. And it is definitely off the charts when you are pointing fingers, which as a foreigner would be completely normal to you.

Meaning of Middle Finger in Japan

Yes, for you, it might be something very demoralizing and derogatory, but in Japan, there is nothing like that.

On the contrary, it is a family-friendly gesture that means something completely different. One of the firsts where something is an offense in western countries but not in Japan.

There is a very famous rhyme related to fingers where Japanese people associate each of their family members based on their fingers and I think you can guess what the middle one stands for it is for the elder brother. An elder brother or ‘ani’ in Japanese is referred to by the middle finger.

However, Japanese people may be very well cultured but they are no halfwits. They know what is the predominant meaning when someone raises a middle finger out of the blue, thanks to the entertainment industry and networking.

So if you are thinking of raising it to a friend for entertainment, refrain because it may backfire. It would make things bizarre for you and your local friend immediately and things may go downhill.

And Japanese people deem it disrespectful when someone maligns them in their homeland so if you think you can get away with it, you assume wrong.

Accepting or Offering a Gift In Japan

This can be tricky for many people too. What’s it in giving and receiving gifts? It is a normal exchange occasion where all that matters is the receiver to say thank you and smile. But in Japan, you need to do a bit more exercise than that.

A humble bow is always present in the gift-giving ceremony, where the receiver bows and accepts the gift with both hands.

Yes, receiving a gift from one hand can also be demeaning for the Japanese people. The same goes when you are offering a gift, make sure you give it with both your hands!

Gestures to Avoid in Japan

We have been taught to maintain eye contact in the deepest manner possible to show the other person that you are thoroughly interested in a conversation and you are attentive.

But in Japan, this act can be considered hostile and vigorous. Japanese people may feel swamped by your stare because all they need is some comfort space while conversing and it might not happen if you are constantly looking at them.

So try to stare away or take a glimpse of what is downwards and sideways.

A crossed-arm person can turn out to be very reserved and reticent in Japan. So if you are standing with your arms crossed in a metro station looking for a goofy chit-chat while waiting for the train to arrive, you might have a tough time because no one would talk to you.

While standing and traveling around in Japan, standing with your back bent and placing your arms in the pocket might seem comfortable and a cool way to stand, you may look like a very lethargic and inactive person.

This move might spontaneously make you unattractive and this is no exception in other parts of the world as well. An ideal body structure requires you to stand with your back straight and the same is followed in Japan.

So make sure that you make a promising appeal on the streets in Japan with the right body posture and keeping your arms out of your pockets. 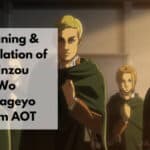