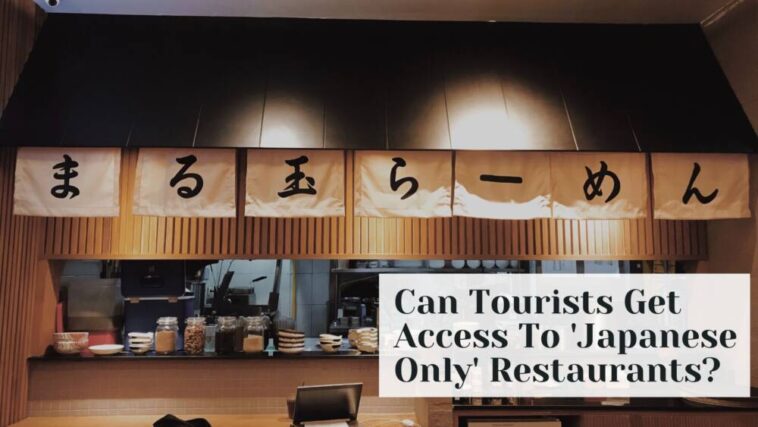 Wondering can tourists get access to Japanese only restaurants? In this blog, we talk about ‘Japanese-only’ restaurants in Japan. And if you can enter it as a tourist.

Have you ever wandered around Japan and saw a beautiful restaurant but with a sign that says Japanese-only?

This isn’t new in Japan though because there are restaurants all over the country that are open to locals only. Yes, you heard that right and these restaurants are often called ryōtei (料亭). These are traditional Japanese restaurants that serve authentic Japanese food.

In this article, we’ll discuss if tourists can get access to ‘Japanese Only’ restaurants and how.

What are ‘Japanese Only’ Restaurants?

Ryōtei (料亭) is a traditional and authentic Japanese restaurant that serves legit Japanese food. In some cases, restaurants like these in the province also serve specialty dishes of the said province.

Generally speaking, locals as a whole are the only ones accepted in these types of a restaurant but in most instances, ryōtei (料亭) is used by wealthy and influential Japanese folks for their high-end meetings in both business and politics.

The discreet and hidden style of ryōtei (料亭) makes it perfect for rich Japanese businessmen and politicians to discuss important matters that are definitely confidential and controversial at some times.

Ryōtei (料亭) is also hidden in the sense that it is not displayed out in the open as an exclusive restaurant that you can dine in as a local. In the past, you have to be informed where it is located first; this is to ensure its exclusivity for its patrons.

The secretive style of these restaurants increased the suspicion of the Japanese government back in the 1840s as they’d usually put in spies to monitor the activity of such influential people.

However, in 1993, then-Japanese Prime Minister Morihiro Hosokawa declared the cease of use of ryōtei (料亭) due to the business and political activities that happen behind closed doors. Now, ryōtei (料亭) is more commonly used for dining purposes only.

Nowadays, you can look at ryōtei (料亭) on Google or you can ask around in the area of Japan that you are in. In the later part of this article, we’ll discuss how you could get in at these types of restaurants as a tourist.

What To Do To Get Access To ‘Japanese Only’ Restaurants

As a local, it is technically impossible to get access and dine in ryōtei (料亭) all across Japan no matter how flashy you look or how simple your dress is. It doesn’t matter as well if you show them a lot of money or jewelry.

The only way for tourists to get access to ryōtei (料亭) is by tagging along with a local. In that sense, the local can refer you to the restaurant as a guest for that day. You can try your luck with some of the ryōtei (料亭) across the country though as it is said that some accept walk-ins for tourists.

In case you’re wondering, ryōtei (料亭) is not in any way discriminative towards any nationality or race, this is just how they operate as a type of Japanese restaurant ever since. Some say that they limit the diners to locals so that the culture and way of eating the traditional dishes will be kept.

This is why they still allow tourists to dine in ryōtei (料亭) as long as they’re accompanied by a local that can surely guide them on what and what not to do in a traditional Japanese restaurant. The locals can also guide them throughout the meals and how to eat them to get the best experience possible.

However, it is important to take note that when traveling in Japan in general, it is a must to study the basics of their culture and traditions first before visiting so that you won’t offend or insult anyone with your actions that the Japanese people aren’t used to.

This is also very much applicable when dining because the Japanese people and restaurant owners all know and abide by the true Japanese way of eating and dining their traditional dishes like sushi and ramen.

We actually discussed sushi, vegan sushi, and the right way to eat sushi in one of our articles.

What To Expect In A ‘Japanese Only’ Restaurant

Most probably, you’ll see authentic and traditional Japanese dishes in a ryōtei (料亭) like sushi, ramen, udon, katsu, and many more. Although when you visit the provinces of Japan, there might be specialty dishes in connection to their harvests there.

Given the more quiet environment of a ryōtei (料亭), it is expected of you as well to keep quiet and talk in a low tone when conversing. There are no rules stating that you can’t talk out loud but some patrons or restaurant owners might find it disrespectful if you do.

You might be wondering how costly it can get to dine in a ryōtei (料亭) given its exclusive and high-end feel but that’s not always the case. These types of restaurants aren’t always expensive to dine in as there are some ryōtei (料亭) that are still affordable for everyone.

There’s no denying that there are some ryōtei (料亭) that are more on the high-end side because of the exclusivity and rarity of the ingredients used or the technique that is required to make the dishes come alive on the plate.

Japanese Point Of View On ‘Japanese Only’ Restaurants

Ryōtei (料亭) isn’t a new or fresh sight for the Japanese locals so they just see it like how they would see any other Japanese restaurant in the area. Since they can dine in a ryōtei (料亭) anytime, it is nothing really special for them anymore.

More often than not, a ryōtei (料亭) also serves food that is common for them and in any other traditional Japanese restaurant that isn’t exclusive to locals. The only advantage they have with a ryōtei (料亭) is they can eliminate the long queues of tourists for the restaurant by going to a ryōtei (料亭).

And as mentioned earlier, a ryōtei (料亭) was mainly used in the past by wealthy Japanese businessmen and politicians to discuss important and confidential matters away from the public eyes and ears. Since this isn’t the case anymore, ryōtei (料亭) is not as functional as it used to be.

Still, for Japanese locals with a tourist guest or sponsor tourist, bringing them over to a ryōtei (料亭) could be a fun and memorable experience for them to see and feel what it is like to dine in an exclusive Japanese restaurant for their short stay in the country.

Western Equivalent Of ‘Japanese Only’ Restaurants

Westerners have a different social upbringing and perspective on topics like having exclusive settings or places for a select group of people. Issues like racial segregation might be brought up if restaurants like this were to be opened in Western countries since it was a very big issue before.

Given this background, exclusive restaurants for a specific group of people are discouraged in Western countries as an added effort against discrimination in general. Having a ryōtei (料亭) is not really a part of their culture so there’s a chance that the other groups of people that aren’t allowed in might take it the wrong way.

The closest equivalent of a ryōtei (料亭) in Western countries are high-end restaurants that require membership in a certain club, country club, or hotel to get access to. Members of these places get exclusive access to their amenities like restaurants and they can bring over guests as well.

The only difference between this with a ryōtei (料亭) is that these types of places in Western countries are high-end and people of power, influence, and wealth are the common patrons in these types of restaurants.

Membership-type restaurants aren’t exclusive to one nationality though unlike a ryōtei (料亭) but it serves the same purpose of only serving a select group of people that the restaurant requires.

It might be a surprise or a mystery to you to see a beautiful and elegant Japanese restaurant in Tokyo or other regions of Japan with little to no diners in it. You try to get a table but the restaurant staff informs you that tourists aren’t allowed to dine not unless with a local.

Don’t take offense as this is a part of Japanese culture and it is called ryōtei (料亭). it is kept exclusive to the locals to maintain the culture and traditions of eating authentic Japanese dishes.

We hope that this article has been helpful in determining whether you can access ‘Japanese Only’ restaurants or not.