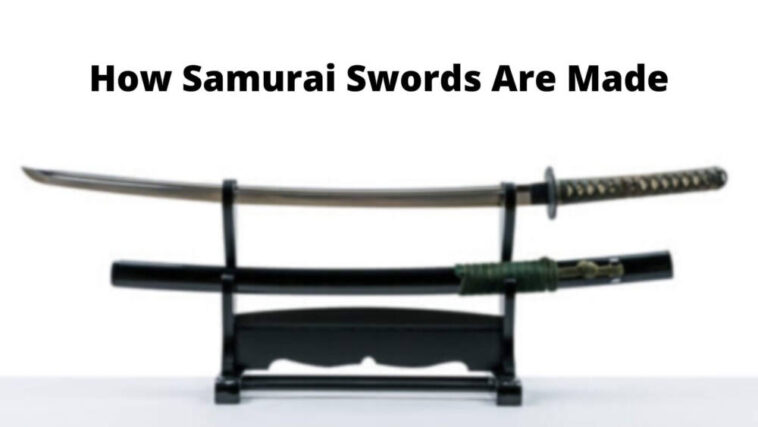 Curious how Japanese swords are made?  Read further to know more about the traditional Japanese swords like Katana and swordsmithing techniques that the Japanese used to make the best samurai sword weapons.

Japanese swords are famous worldwide and are one of the most important symbols that represents Japan.

How Japanese swords are made?

Japanese swords are made with traditional steel called tamahagane. The first step involves smelting iron sand with charcoal in a furnace. High and low carbon content is extracted and further purified, heated, hammered, and folded a dozen times to form strong layers. The blade is then coated with charcoal and clay mix and heated. The sword is then dipped in water to attain a curve and then polished. Lastly, the sword is mounted and decorated.

Japanese craftsmanship, dedication and hardwork in engineering a piece of sword to turn it into a thing of beauty is commendable over a millennium now.

It is said to possess the warrior’s soul and is passed down from generation to generation and is valued as art and religious ritual. It is more than just a piece of weapon used for fighting in the field.

These Japanese swords aren’t used all the time, unnecessarily but only when there was an absolute need for it. It’s a very precious object for the Samurai as no one else was allowed to own it.

I own a heirloom katana that was of my father’s great grandfather who was a samurai. It still looks like it’s made yesterday whereas in reality it is about 100 years old. It’s extremely sharp and perfectly tough. The katana is one of my priced possessions.

Let’s move further to understand how are Japanese swords made and the art of swordsmithing in Japan.

It took months to just make a single blade by the Japanese craftsman where they worked dedicated to bring out the best in their weapons. These craftsmen had a perfect knowledge on chemical metallurgy as well as swordsmithing.

The process was quite extensive and dozens of labourers would be involved in the entire process (sometimes to just make one). That’s how Japanese swords are made, with dedication and minute detalings.

Well, the most important thing is to have the chemical knowledge as without that the entire method of swordsmithing is a waste.

Now, let’s move forward, step by step on how Japanese swords are made!

In this process, the tatara is made by smelting iron sand that contains one iron ore. It is done with charcoal in a huge clay furnace.

The next step is quite important and runs for 72 hours without any intervention or pause. The swordsmiths once realise that it’s the correct temperature, they feed iron sand and charcoal as per the requirements.

The first step is really crucial to move forward to knowing how Japanese swords are made.

This step is done after the 72 hours of extensive smelting process. In the second step of how Japanese swords are made, the blacksmiths break the clay furnace to extract tamahagane.

From the tamahagane, they break further to separate the mass of steel keeping in mind the carbon content. High carbon steel will give the razor with sharp blades whereas the low carbon content one is meant for toughness.

Any form (high or low) of carbon content missing can result in sword abnormalities like dullness or brittle sword. Therefore, both are equally important.

The is one of the most important steps of how Japanese swords are made. All the impurities and slag is drawn away in this step.

The decent pieces of tamahagane are sent to be beaten up by hammer for over 16 times by heating, hammering and folding continuously. This is done to combine the iron and carbon for bringing in qualities like sharpness, toughness etc.

After the swordsmith removes the impurities the next step is forging the samurai swords.

After being separately forged, they are forged together where the outer shell of steel gives the sharpness while the inner one is meant for toughness and durability.

This process might seem a little tedious but it’s done with great patience. This is how Japanese swords are made with forging carbon and steel.

Blade coating is done after forging where a deep layer of clay and charcoal mixture is applied on the upper side and back edge. This is only for the primary coating and gives a wavy edge to the sword that is popularly called hamon.

This blade is then fired at just 1500 degrees fahrenheit or 815 degrees celsius. The degree of heat shouldn’t be any less or any more. There’s a risk of cracking or damage if the heat is excess.

This is how Japanese swords are made at this stage.

If you are wondering how Japanese swords are made with perfect curves then here is your answer.

After heating the blade is pulled out of the fire and dipped in water. The change in temperature causes the blade to bend and give its signature curve.

How Japanese swords are made with perfect shine? This is a crucial stage and involves several sub steps to make the polish perfect.

After being fully forged, it is polished with a few grinding and polishing stones to sharpen the razor blade in the polisher. This process is not as simple as it seems as it takes weeks and months to do it.

If the polisher is inexperienced, the blade’s geometry can be disturbed or it can wear down too much steel which can destroy the sword’s cultural, functional and historic significance. This is because any extra amounts of oil leftovers can lead to corrosion and rusting.

The salts present in the polishing oil can lead to the development of molds and mildew. Polishing the blade improves the blade’s clarity, aesthetic, and characteristics.

One can look at the blade and talk about how the cutting edge was cooled, the carbon content of the steel and how well they’re polished.

The blade is then mounted with a decorative guard and then carpenters fit the blade in a scabbard.

There are a few artisans that decorate it and then the handle is made with leather, stone or gold.

This step is as important as the first few steps of making the blade. It is considered a piece of art. When looking at how are Japanese swords made, this step is quite unique and meticulously done.

This is the last step of how Japanese swords are made. After the decoration, handle and everything, the sword is handed over to the swordsmith to check if everything is perfect.

Once it is declared good for usage, it is handed over to the Samurai or the new master.

Where can I Watch How Japanese Swords Are Made?

If you’re really interested in seeing how Japanese swords are made you should definitely visit The Japanese Sword Museum in Tokyo.

This museum showcases the art of how Japanese swords are made. It is run by the Society for the Preservation of Sword Arts and gives a deep insight on Japanese weaponry.

It contains many swords that have special status or hold cultural significance. The Occupation Forces tried to destroy the swords after WWII but somehow it’s safe and saved.

Another museum, The Bizen Osafune Sword Museum. The museum has an amazing collection of swords from the past and is one of its kind.

You can also attend seminars and workshops that show you how Japanese swords are made and maintained, various people involved in building the Japanese weapon and other various components that one is interested to know.

You can also ask questions if you have doubts and learn so much more. There are workshops where visitors can see how Japanese swords are made from tamahagane, the traditional Japanese steel.

There are limited dates and timings of these workshops so make sure you book your slot in advance.

After learning how Japanese swords are made, let’s move on to knowing what are the different types of it.

How are Japanese samurai swords made?

Why Japanese swords are so expensive?

Samurai swords are expensive because of how Japanese swords are made. They require utmost skill and dedication and each of them can take more than 18 months to create. The blades alone can cost more than 1000 dollars. This traditional sword-making process has been going on for centuries and is still the same.

How are samurai swords so sharp?

Samurai swords are so sharp because they’re made with two types of tamahagane that are high content carbon which gives razor-sharp edges and toughness respectively. It is heated, hammered, and repeatedly folded a couple of times to retain strength and durability.

It’s essential to learn how Japanese swords are made and how valuable they are especially in Japan because of their rich historical roots.

Japan weaponry is famous worldwide and some of the samurai sword techniques and traditions are now used to make culinary knives as well. These knives are extremely sharp and good to use but are quite pricey because of its history.

Anyway, I hope you enjoyed learning about how Japanese swords are made as much as I love pouring out all the information and details. 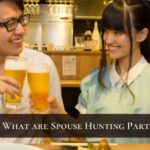 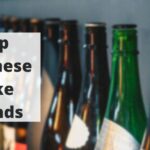