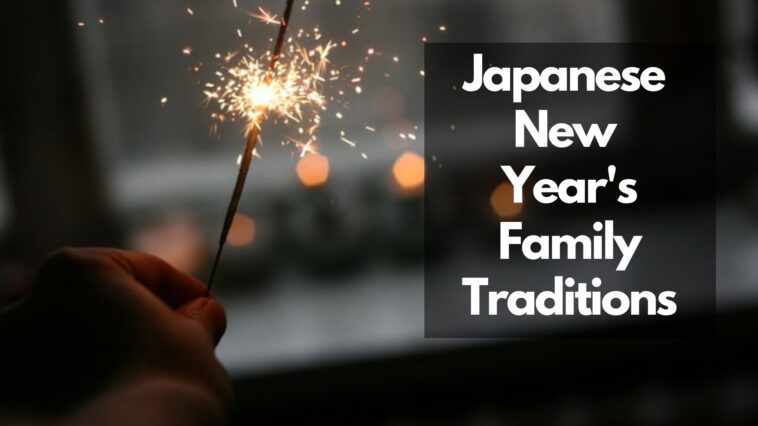 Celebrate Japanese new year with your family the right way. Here are the essential Japanese New Years family traditions you should know

I love celebrating New Year’s with friends and family; there is a whole different joy to this time when we all bid goodbye to the old year and welcome the new year with joy, excitement, and splendor.

In Japan, two huge events overlap each other adding to the joy and fun. Any guesses on what these two events could be? Yes, Christmas and New Year!

These two events are celebrated in quite a different way by the average Japanese family. I love Japanese culture and all the traditions that the Japanese follow.

If you love Japan and all the essential Japanese New Years family traditions, this is the guide for you.

Here is a step-by-step process of how the Japanese welcome the new year.

Did these words confuse you? I can understand this completely. Hearing these words can be extremely confusing, but fret not! I am here to help you out.

Nenmatsu-nenshi means “year-end, year beginning”. These words describe the time of the year when we are all running busy and short of time.

We are all stressed out because of all our work, but it also marks a time when we look forward to the new year and how we will spend that time with our friends and family.

When we look at the dates, it covers the last days of the ongoing year and the beginning days of the new year. 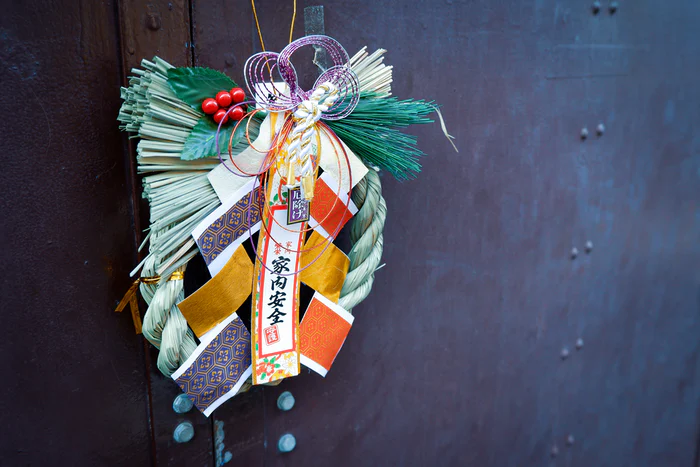 Toshikoshi means “passing the year” and this term means the events and customs that come at the end of every year.

Shinnen means “new year” and it talks about all the celebrations and festivities that take place before everybody goes back to work on January 4.

The official new year holidays in Japan begin on December 29 and the celebrations go on till January 3.

It really is one of the jolliest times of the year in Japan that is filled with laughter, fun, and joy with your loved ones.

Here are some of the most unique traditions that are followed in Japan in all the New Year’s events.

Whether you are in Akita or Shimane prefectures, you will be celebrating at least half of these traditions when you are in Japan.

All of these traditions will make you wish the holidays would never come to an end.

Japanese people start getting all their New Year seasonal greeting cards together right from the beginning of December.

These preparations begin even before the Christmas trees are put up. The Japanese use a special postcard known as nengajo.

These postcards are especially only used for New Year’s greetings.

You can drop off these greetings by December 25, and they will reach their destination by January 1 or at least by January 3.

These postcards are a way to stay connected to friends, family, relatives, and colleagues. With these postcards, you can show your love to your loved ones at least once a year.

These postcards also come with a special feature. There are numbers at the bottom of the postcards that are known as nengajo tosen.

With these special numbers, you may win a prize or some cash.

The numbers that have won the prize are all announced on the Japanese Postal website in the middle of January.

So, if you have received these postal cards, keep your eyes on the website to know if you have won the prize.

Japan has its own version of badminton called hanetsuki, and to play this traditional Japanese game, a rectangular wooden paddle is used.

This wooden paddle is known as Hagoita. These days, hagoita is used as a traditional decorative item for New Year’s.

These traditional decorative items are known to ward off evil spirits.

The logic behind this is that just like a badminton bat hits the badminton feather, this decorative item will hit the evil away.

The paddles are extremely beautiful and look marvelous. These are decorated with 3D models made of silk, wood, and washi Japanese paper.

These 3D models look like the faces that are often seen in traditional theatre plays. These can also represent faces of geisha, kabuki actors, or sumo wrestlers.

Yet another unique tradition that is followed in Japan to celebrate New Year’s is what is known as Oosoji in Japan.

This is the Japanese version of “Spring Cleaning”. This tradition is followed by the entire family when they pitch in to clean the house to welcome the new year.

This tradition is usually done on the last weekend of the year. This is done so that they can have a clean and fresh start to the new year.

After the house is completely cleaned up, families start decorating the house with New Years decorations, which are known as Oshogatsu Kazari in Japan.

The decorations consist of three bits of bamboo and some pine leaves, two tiers of mochi, rice cakes with a tangerine on top, and a New Year’s wreath.

It is also very important to take care of the timing of completing these decorations.

It is believed in Japan that if you rush into the decorations and complete them on the last day of the year, the gods will get angry and so, it will bring you bad luck.

The act of completing the decorations on the last day of the year is known as “one-night decoration”.

As per the traditions, these decorations should be completed well before New Year’s eve.

When you have cleaned up the room and completed the decorations and it is time for the festivities to start, families cook up a traditional meal called toshikoshi soba.

The long soba noodles have a special symbolism in Japanese traditions. These noodles represent a general wish for a long life that is filled with precision and attention to detail.

The toppings on your soba noodles depend on the region you are in. In Tokyo, the toppings usually consist of shrimp because it represents long life.

Soba also has another special significance. It means you let go of all the things that you have gone through in the previous year.

When you slurp down the noodles, it means that you forget all about the things that have happened and move on.

Joya no kane is a large bell at a temple or shrine.

This bell is rung at midnight on New Year’s eve and it symbolizes the start of a new beginning.

This ringing of the bell is done by the priest of the temple or shrine and it is done in front of thousands of visitors.

This is a tradition that requires you to visit the temple or shrine on the first day of the new year.

In ancient Japan, people offered prayers for abundant crop and excellent health for the previous year. They now offer prayers for other wishes in addition to the crop and good health. This tradition dates back to the Meiji era (1868-1912).

Hatsuhinode derives from Shinto, the ancient religion of Japan. Toshigami, or New Year gods, are said to appear at the first sunrise in the Shinto religion. then grant their adherents happiness, prosperity, and good health.

The most popular places to go to enjoy Hatsushinode are: Enoshima in Kanagawa,

This is a special meal, which could be breakfast, lunch, or dinner.

It depends on the family and the district where you are. This special meal is usually consumed only during the first three days of the year.

The women of the house spend a lot of time in the kitchen cooking this special meal for the first three days. They usually prepare and cook everything in the last couple of days.

Every item in this special meal symbolizes something and has deep meanings. For instance, shrimps are eaten for longevity.

Similarly, sweet chestnuts are for wealth and herring roe is for fertility.

Ozoni is a traditional New Year’s breakfast that consists of a broth or soup with grilled mochi in it.

The broth that is used in Ozoni depends on the family or the region you are in. Unfortunately, this breakfast meal also causes several casualties in Japan every year.

The casualty can usually be seen on elderly people who pass away due to choking on the mochi.

If you eat it, make sure that you eat it and chew it very slowly so as to prevent any unwanted situation.

Hamaya means an arrow to break evil. It is a little wooden arrow that is purchased at either a temple or a shrine.

It is believed that buying this wooden arrow brings good luck in the coming year.

We have all had fortune cookies as kids (or adults, if you are like me). There is such a tradition in Japan where you buy omikuji.

Omikuji are fortunes that are written on tiny strips of paper and can be bought at shrines or temples.

The best fortune you can get is called daikichi and the worst one that you can get is kyou. These fortunes are often available scrolled up or folded.

This creates suspense. If you happen to come across a bad fortune, you can use your less dominant hand to tie that fortune to a special fence that is reserved for the lot.

It is believed that doing this helps you leave bad luck behind.

Otoshidama refers to a custom of giving the kids some cash in an envelope on January 1. While it’s not a huge amount, it does mean a lot to the kids as they eagerly wait for their envelope on Jan 1.  Adults can sometimes get them to, but when I was a kid, kids were the only ones who could do it.

It is belived that otoshidama has its origins in Japanese folklore and that the gifts made to children serve as an offering to the “toshigami,” the Shinto gods of the New Year.

On the seventh day of the new year, the Japanese make a special rice porridge called nanakusa-gayu.

This porridge helps to settle the stomach and soothe the heaviness that you feel after all the heavy eating and drinking.

The porridge consists of seven different types of herbs and a light broth.

What do Japanese families do to start the New Year fresh?

A common ritual in almost all Japanese households is for the entire family together deep clean the house – this ritual is known as Oosoji. This is the Japanese version of Spring cleaning. The house is cleaned thoroughly including spots that are not often cleaned or overlooked. This is usually done towards the end of December. Other than this, the entire family also starts preparing for the new year by prepping for osechi ryori that includes all the traditional Japanese new years foods.

Traditions for the new year!

These were some of the most unique traditions that are followed in Japan on New Year. I hope you found these interesting.

I wanted to visit Japan during these New Year holidays to experience all of these, and I am pretty sure you feel the same way. 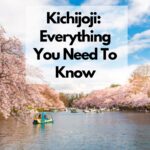 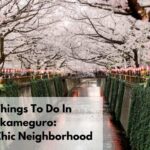