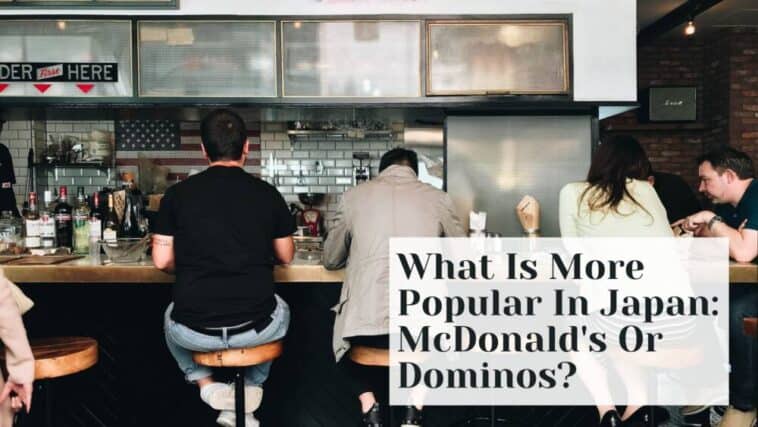 Year after year, more and more Western food chains become popular in Japan. And with the busy and bustling Japanese lifestyle, the locals are opting for convenience and ease of access when it comes to their food.

Both of these chains are known for their household menu items like the Big Mac for McDonald’s and the Pepperoni Pizza for Domino’s.

In this article, we will talk about which of the two Western fast food chains is more popular in Japan with a few factors like the food offered, overall food options, convenience, and price when it comes to their names.

What Is More Popular In Japan: McDonald’s Or Domino’s?

The Ultimate Household Name For Fast Food In Japan

McDonald’s is clearly miles ahead of Domino’s in terms of popularity not only in Japan but in the whole world. It’s almost impossible to think of where to eat outside without having McDonald’s as one of your options.

Although Domino’s has created a name for themselves as one of the top pizza chains in Japan, they’re still miles behind McDonald’s. The easiest determinant of this is that you’ll see more McDonald’s in Japan than branches of Domino’s.

Not to mention McDonald’s have a lot of options too choose from which makes them more famous and convenient to choose whatever time it is whether it’s early in the morning or late at night. We’ll discuss this more later on in the article.

Popularity Of McDonald’s And Domino’s in Japan

As mentioned above, it’s common knowledge to say that McDonald’s is the most famous fast-food restaurant in the world and nobody comes close. There’s virtually a McDonald’s in every country in the world, and that just shows how influential and big the franchise is.

On the other hand, Domino’s is competing with a lot of pizza chains in the United States with the likes of Papa John’s Pizza, Pizza Hut, and Little Caesars. Although some might say that Domino’s is more popular among the other pizza chains, the opinions of the people are still divided.

Even though McDonald’s has a lot of competitors as well in terms of food served like chicken and burgers, it’s safe to say that McDonald’s trumps all the other choices when it comes to international presence.

Having these facts in mind, we can’t just conclude that based on McDonald’s international dominance, it is automatically more popular than Domino’s in Japan. There are still a number of factors to consider.

In one way or another, Western fast food has definitely influenced Japan’s modern taste and cuisine. Fast food in general has introduced a new style of food consumption which is ordering quickly and eating quickly as well.

The Japanese have mixed opinions when it comes to Western fast food; some find it good because it is very convenient and it fits their fast-paced lifestyles, while some people find it bad because fast food goes against a healthy lifestyle through proper diet and nutrition.

What’s safe to say is that the growth in popularity of Western fast food in Japan has helped a Japanese demographic that lacks the time to sit down and enjoy good food. Fast food has solved that problem by providing convenience without compromising the flavors and the price.

Fast food chains in Japan like McDonald’s have shown efforts in addressing the concerns of the Japanese public in terms of healthier options given the rise of their popularity among the Japanese people, especially the youth.

McDonald’s Japan has introduced healthier side dishes like edamame and corn, salads, and many more.

Domino’s Japan has done the same as well by introducing a few healthier pizza items like a pizza with smoked salmon as the toppings and shrimp pizza. They also introduced the Choregi Salad which is exclusive in Japan only.

In hindsight, you’ll get a lot more options at McDonald’s compared to Domino’s because McDonald’s offers a wider variety of food items from burgers to pies. On the other hand, Domino’s is just widely known for its Pizzas and some sides.

However, this doesn’t really matter much in determining McDonald’s or Domino’s popularity in Japan compared to the other factors. It’s a given that restaurants or fast food chains have their own specialties in terms of food.

Having your household name through food increases your popularity compared to offering every food imaginable in every cuisine. This is why McDonald’s and Domino’s are famous to begin with because they made a name for themselves with their respective food options.

In addition, since McDonald’s offers more variety with their food items on the menu, they can cater to their customers at any time of the day. From breakfast to a midnight snack, the Japanese people could have McDonald’s as their option to eat food.

This gives McDonald’s a slight edge over Domino’s in this department. People look for McDonald’s more and most times because of their variety of food options compared to Domino’s and their inability to cater to hungry patrons at certain times of the day.

Although the food options offered in McDonald’s and Domino’s could actually determine the occasion or reason why it’s a person’s choice. It could be because of a group meeting or just a typical lunch in the middle of the day. We’ll discuss this more later on in the article.

Food Options in McDonald’s Japan Vs in Domino’s Japan

As stated earlier, McDonald’s Japan could cater to more customers at any time of the day given its diverse list of menu items from breakfast to a midnight snack. This only means that McDonald’s has a lot more options compared to Domino’s.

This is common knowledge as well because Domino’s are only known for its pizza dishes and even though they have a lot of items to offer to people, McDonald’s simply has the range to satisfy customers whatever their cravings are.

In terms of food options, what gives Domino’s the upper hand is its ability to serve a crowd or a group. Since Domino’s offers good and tasty pizzas made for sharing, it would be the common choice for people in groups to eat over McDonald’s.

Even though this demographic is obviously smaller than all the individual Japanese people that consume fast food in a day, it is still a good number to consider given that people dine in groups often and throughout the day as well.

With all this to consider, we have to give this criterion to McDonald’s Japan because they have delicious and convenient food options throughout the day, making them a tad bit more popular than Domino’s Japan and what they have to offer in their menu.

It’s expected to see Domino’s ranging on the pricey side because it’s food meant for sharing. Unlike McDonald’s and its cheap average price for a solo meal.

Given these price averages, it’s not advisable to order Domino’s or pizza in general in Japan if you’re just dining alone. As mentioned earlier in the article, Domino’s is best eaten in groups to make it more enjoyable and affordable.

If you’re alone and on a budget, McDonald’s surely wins this nod, but if you’re with a group, Domino’s is the definite choice to enjoy.

Cost of living in Japan – Check out guide.

As our last determinant, we are weighing convenience against occasion because these two are McDonald’s and Domino’s specialties respectively. It all just boils down to what the customer is looking for at the end of the day.

Without a doubt, McDonald’s offers convenience among anything else because you can literally walk up to the cashier, order your food of choice, pay by cash or card, and get your order in a span of 5-10 minutes.

There are not a lot of places that can consistently do what McDonald’s does in terms of convenience and it’s their biggest advantage as a fast food restaurant in the very competitive industry.

Pizza is one of the top foods for sharing options that you can choose from and Domino’s is one of the best places to make pizza. Not a lot of places can offer the tasty and consistent flavors that Domino’s brings which is why we put occasions as their top asset.

Now, we can’t really say who wins in this department because it’s all up to the customer on what he/she needs for that day. Some customers need the convenience because they’re short on time, while some customers are looking to celebrate something with a group.

What Is More Popular In Japan: McDonald’s Or Domino’s?

Fast food chains continue to make surge in popularity in Japan with their convenient but tasty food choices that a lot of Japanese people love. It perfectly complements a local’s busy day by providing a sumptuous meal on the go without the hassle of waiting in long queues and paying extra for the convenience.

Among these fast food chains are McDonald’s and Domino’s and even up to this day, their popularity continues to rise in Japan with specialty food choices of their own.

We hope that this article has been helpful in determining which fast food chain is more popular between McDonald’s and Domino’s in Japan. 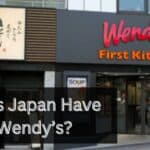 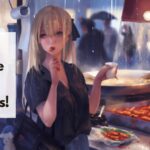