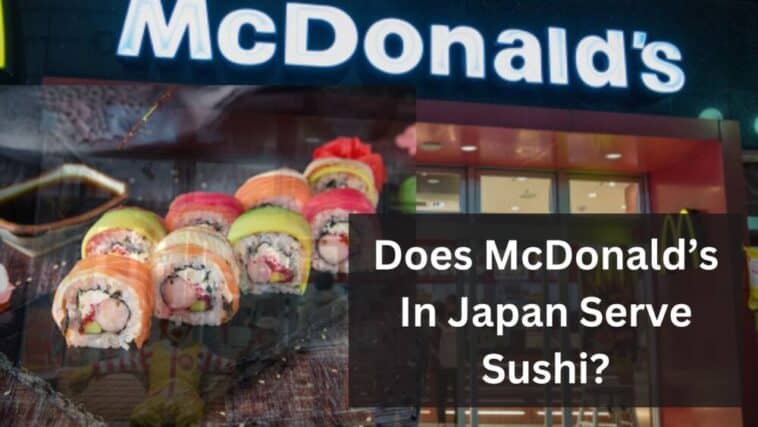 Japanese cuisine consists of many meals that not just taste and look good but are prepared with great care and practice.

The Japanese people place great significance when preparing traditional meals like ramen and sushi and each Japanese meal includes an algorithm that generations have practiced to ensure the authenticity of the cuisine is not forgotten.

And if you’re here to know if sushi is available on McDonald’s Japan menu, then make sure to read further below!

As we’re all aware, McDonald’s is one of the most renowned fast food companies in the world that originates from The United States. It was founded by Richard and Maurice McDonald in 1940 and has worked its way through expanding to over 100 countries across the world.

This fast-food giant specializes in making burgers, french fries, chicken nuggets, and a plethora of other fast-food meals for affordable price ranges.

McDonald’s was able to expand by offering franchisee licenses to businesses in other countries and this helped it reach multiple locations. Presently, McDonald’s Corporation has over 38000 outlets operating around the globe and The US has the most number of McDonald’s outlets.

McDonald’s was introduced in Japan in 1971 in Ginza which is situated in the capital city of Tokyo. Currently, there are nearly 3000 McDonald’s outlets operating across the entirety of Japan which makes Japan the second country in the world to have the highest number of McDonald’s outlets after The US.

However, these meal options are incorporated with Japanese flavors to make them stand out from the rest of the fast-food restaurants. In addition, to draw in more customers, McDonald’s Japan also introduces seasonal treats inspired by famous Japanese holidays.

Is Sushi Served In McDonald’s Japan?

Now it’s time to answer the question of the day which is, “Does McDonald’s in Japan serve sushi?” The answer to this question is no, McDonald’s restaurants in Japan don’t make or serve sushi.

As we mentioned above, the priority of most Western-based fast-food restaurants is to stick to their original food menu by just incorporating the most popular flavors of the host country.

This is only done to grab the attention of the customers and to stand out from the competitors therefore a higher sales revenue can be achieved.

Similarly, McDonald’s in Japan also follows the same strategy of incorporating the flavors of Japanese cuisine into their Westernized menu of burgers and side dishes just to diversify their menu to reach as many customers as possible.

Furthermore, from a Western fast food restaurant’s perspective, it’s intricate to completely replicate the traditional foods of the host country and provide them to the customers for a cheap price.

Therefore, traditional Japanese foods like sushi aren’t available on the McDonald’s Japan menu. It’s also best to keep in mind that making sushi involves years of practice and experience which can only be done by professionals as every detail and step must be followed cautiously.

There are multiple reasons why a fast food restaurant like McDonald’s doesn’t have sushi on its menu, particularly in Japan. Let’s take a look at what these reasons are below.

To start off, McDonald’s is a fast-food restaurant, by definition, this means that McDonald’s only prepares foods that are pre-made and processed which only requires a quick fry in a pan before they’re served.

That’s why fries, burgers, chicken nuggets, and pies are quickly served at McDonald’s and customers need not wait long.

However, making sushi requires intense attention to detail even doing one wrong step can result in disastrous-looking sushi. It’s a time-consuming process to make sushi and it’s crucial to have the necessary ingredients.

These ingredients can differ depending on the type of sushi. For example, Nigiri sushi entails rice and fish and Temaki sushi must have a seaweed wrapping.

Furthermore, each sushi type consists of different steps which can only be done by professional sushi chefs. Thus McDonald’s employees lack the practice and skills of making traditional sushi.

In addition, the ingredients necessary for making sushi must be fresh and hygienic. Since raw fish is a major component in sushi-making, the fish must be freshly caught and of high quality or ‘Sushi Grade’ in other words to ensure that they’re fit for raw consumption.

Therefore, being a fast food restaurant it’s not practical for McDonald’s to follow all the steps of making sushi as it’s time-consuming, and expensive because high-grade ingredients and professional chefs are vital for the process.

Will There Be Sushi In McDonald’s Japan In The Future?

When taking into consideration of the entire sushi-making process, it’s impossible to believe that McDonald’s in Japan would serve sushi on their menu.

As we know, that making sushi necessitates several ingredients and steps which simply cannot be a dish entrusted to a fast food restaurant like McDonald’s.

Freshness and cleanliness are key to making sushi and that cannot be guaranteed at any fast-food restaurant, even McDonald’s.

That’s why in Japan, there are specialized restaurants for preparing traditional foods like sushi which are run by professionals and they’re trusted by both locals and tourists in Japan for preparing fresh sushi.

However, there are meals in McDonald’s Japan that bring about the flavors of Japanese cuisine which are favorites among the Japanese people.

McDonald’s in Japan has undoubtedly thrived in the fast food market in Japan thanks to its affordable pricing strategies and the combination of Western and Japanese cuisines.

Although McDonald’s Japan has successfully replicated some of the popular dishes and tastes of Japanese delicacies, it can never come close to preparing the original version of the Japanese dish.

However, none of these conventional Japanese foods are served at McDonald’s Japan, unfortunately. You may like sushi and ramen but the best spots in Japan to get this food are the classical and authentic Japanese restaurants that specialize in preparing such dishes.

In addition, most Western-based fast food restaurants like McDonald’s, Burger King, Pizza Hut, Domino’s, etc only focus on implementing the flavors of the most popular Japanese dishes to their foods and don’t rather excel in making traditional Japanese food.

This is because the Japanese people prefer to have these meals made at home or at restaurants where every nook and cranny of the original recipes are carefully followed.

Other Meals Inspired By Japanese Cuisine In McDonald’s Japan

No matter wherever you’re in the world, the McDonald’s restaurants in that particular country will always have a meal that’s inspired by local cuisines.

If you happen to travel to Japan and want to try a meal that’s influenced by Japanese flavors then fret not because there are a variety of meals that brings out the subtle Japanese flavors even if sushi isn’t served.

Let’s find out what these meals are down below:

照烧麦汉堡 - The Teriyaki McBurger consists of a patty that’s made out of beef and topped with sweet and tangy teriyaki sauce. It has the right amount of soy sauce and spice which enhances the taste of the burger.

Spicy Double Cheese Rice Burger – This is an exclusive and seasonal food item in McDonald’s Japan. As the name suggests, this is a rice burger that has two rice buns with a crunchy and crispy texture with two spicy beef patties, cheese slices, and jalapenos.

Matcha McFlurry – The Japanese love their green tea, hence McDonald’s Japan has introduced a limited-time McFlurry that’s matcha flavored. This creamy and sweet McFlurry is also topped with chunky Oreo bits or you could opt for the sweet red beans instead of Oreo chunks for a more authentic flavor.

月见馅饼- This pie at McDonald’s stays true to the Japanese dessert flavors as it’s flavored with chewy mochi and sweetened red bean paste which is a local favorite.

There are various other Japanese-inspired meals on the McDonald’s menu in Japan which you can check out on their menu.

Do they serve sushi rolls in Japan McDonald’s?

Sushi is one of the traditional Japanese foods that’s loved by millions across the world. There are 6 types of sushi and each of these types require different ingredients and is made in distinct ways.

Since McDonald’s is a fast food restaurant in Japan, it doesn’t make and serve sushi rolls as making sushi is a time-consuming and expensive procedure.

Is sushi fast food in Japan?

Sushi is one of the popular fast foods in Japan. It’s considered fast food because it can be made quickly and eaten in one gulp.

However, sushi isn’t a fast food that everyone can make as it involves intricate steps and high-quality ingredients that are fresh. Hence, sushi in Japan is predominantly made by experience sushi chefs.

What do they serve at McDonald’s in Japan?

The most popular and exclusive items at McDonald’s in Japan are Teriyaki McBurger, Shaka Shaka Chicken, Shrimp-Filet-O, Petit Pancakes, and Sankaku Pies. 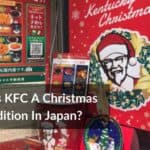 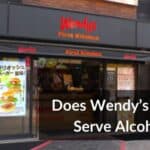