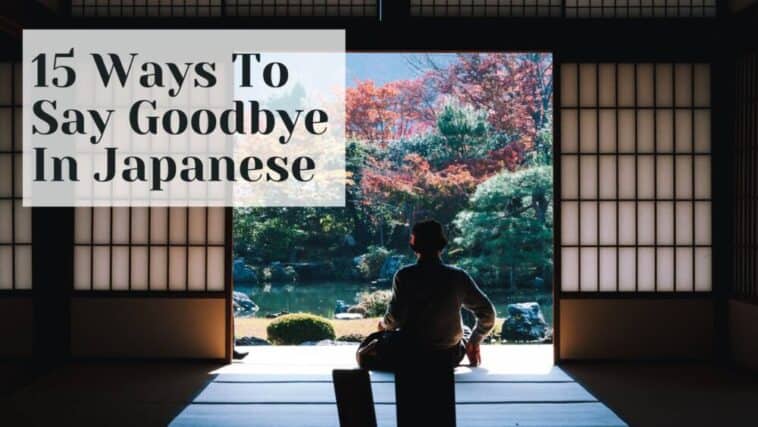 As mentioned in the previous articles, Japanese culture is very rich and it dates back centuries of cultivation by the Japanese people. Over the years, the locals have used a lot of ways to both politely and casually say goodbye to people.

A common misconception among the Japanese people is that they always use the word “Sayounara” (さよなら) to bid farewell and say goodbye, but this is not the case at all because “Sayounara” (さよなら) means that you’re going to go away for a long time.

In this article, we’ll talk about 15 different phrases that the Japanese people use to say goodbye along with their English translations and situations as well.

So, what are you waiting for? Let’s get started with the list!

15 Ways To Say Goodbye In Japanese

Using “Sayounara” (さよなら) may cause confusion or even misunderstandings as it carries the same weight as bidding your final farewell to someone. This has a sense of finality or moving on from something or someplace completely.

Don’t believe too much in what you see in Hollywood movies, folks!

One of the more common and casual ways of saying goodbye in Japan is “Ja ne” (じゃあね) because of its short and easy pronunciation. You’ll hear this quite often among friends saying goodbye to each other or from family members.

As stated above, this is commonly heard among people saying goodbye to their close circle of friends and family given the casual tone of the word “Ja ne” (じゃあね). This shouldn’t be used in a professional setting.

Again, one of the more common and casual ways to say bye is the Japanese version of the word “bye” itself which is “Baibai” (じゃあね). It’s literally just like saying “bye” to the person you’re talking to.

"Baibai” (バイバイ) is used more often by women alongside a cute tone, but some men use this word too and there’s really no rule on what gender is allowed to use the word “Baibai” (バイバイ).

There are a lot of variations to this word but among them, the most common is “Mata ne” (バイバイ) and it’s commonly used in a casual setting among friends and family. The convenience of saying “Mata ne” (バイバイ) makes it a common phrase among the Japanese people as well.

If you want to be more specific to the person you’re talking to, you could add a timeframe in your farewell; this is where the word “Mata ashita” (また明日) comes in.

The Japanese people are keen on their time and they’ll appreciate it if you’re more specific in certain matters like your physical presence. Mentioning the next time you’ll be back will be appreciated by many.

Alternatively, you could change up the phrase depending on the next time that you’ll be back. For example, you can say “Mata raishuu” (また来週) which means “see you next week”, or you can say “Sore made, ja ne” (それまでじゃあね) which translates to (see you until then).

Using the word “Itte kimasu” (行って来ます) is for a very specific situation only and that is when you’re about to leave your house. You’ve probably heard this already in anime and Japanese movies when the character is saying goodbye to somebody in the house.

The word “Itte kimasu” (行って来ます) is not informal, but it is not formal either, it’s just a specific phrase to say whenever you’re leaving your home.

If you ever hear the word “Itte kimasu” (行って来ます), the proper response to this is “毅特萨伊(Itterasshai)” (行ってらっしゃい) which means “be safe” or “go and come back home safely”.

Ojama shimashita – “Thank you for having me over”

One of the more specific phrases in this list, the word “Ojama shimashita” (お邪魔します) is used when you’re invited over somebody’s home. This is the only formal and polite way to say goodbye to the homeowner.

The word “Ojama shimashita” (お邪魔します) literally translates to “sorry for bothering you” but the Japanese people interpret it as “excuse me for intruding”. Make sure to take note of this especially when you’re in Japan!

Osewa ni narimasu – “Thank you for everything”

This one is for the business/professional field and it’s the perfect Japanese phrase to thank and bid farewell to a client. The word “Osewa ni narimasu” (お世話になります) is used to show appreciation and say goodbye to a client or businessperson who has helped you.

The word “Osewa ni narimasu” (お世話になります) is polite and formal to use to everyone but there’s an even more polite way of saying this and you can use “Itsumo osewa ni natte orimasu” (いつもお世話になっております).

This translates to “thank you always for your continued support”; this is usually the line given by the sales rep over the phone or in person whenever they would lock in a sale from you.

If you want to wish someone safety before you go and part ways, the word “Ki wo tsukete” (気を付けて) is the perfect word to use. This is commonly used by locals who are parting ways late at night or in bad weather conditions.

This is in the casual spectrum as typically, you would be parting ways with people that are close to you in the situations stated above.

The word “O-genki de” (お元気で) could be used in many situations because of its meaning. Although it’s more on the formal side, this is still heard among friends and family in the Japanese setting.

The word “Odaiji ni” (お大事に) could also be used as well to peers and coworkers who aren’t feeling well, saying “Odaiji ni” (お大事に) is the proper way of bidding farewell to wish them well and to hope that they get better the next time you see them.

Osaki ni shitsureshimasu – “Excuse me for leaving before you”

One of the most common phrases that you’ll hear in the work setting is the word “Osaki ni shitsureshimasu” (お先に失礼します) and it is a polite way to bid farewell to your boss and fellow coworkers.

The Japanese work culture is way different from the western setup and it’s important to make sure that you say the right words to the people in the office to avoid offending people.

Usually, even if people are done with their work, they don’t leave the office right away and if you decide to, make sure to use the word “Osaki ni shitsureshimasu” (お先に失礼します).

Otsukaresama deshita – “Thank you for your hard work”

Another way to say goodbye in the work setting is the word “Otsukaresama deshita” (お疲れ様でした) and it is used to commend someone for their hard work before parting ways. This could also translate to “good job”.

Tanoshinde ne “Have a good day”

Commonly used in the morning and the afternoon, if you want to wish someone a good day ahead of them, the perfect word to use is “Tanoshinde ne” (楽しんでね). It’s literally the same thing as saying “have a great day” in English.

Among the phrases in this list, the word “Saraba” (さらば) is the one that is the least used among the Japanese people. Although its literal meaning is “farewell”, people barely use it because it contradicts other common Japanese words.

In Japan, you’re more likely to hear “Soubetsukai” (送別会) or a “farewell party” usually celebrated by people who are traveling away from friends, family, or even coworkers.

"Sayounara” (さよなら) isn’t the only word in the complex Japanese vocabulary you can use to say goodbye to someone, in fact, it’s not even the proper way to bid farewell to a Japanese. There are plenty more ways to say goodbye depending on the situation you’re in.

We hope that this article has been helpful in teaching you different ways to say goodbye in Japanese depending on formalities and situation. 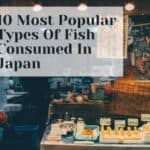 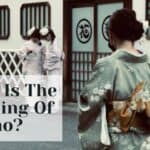