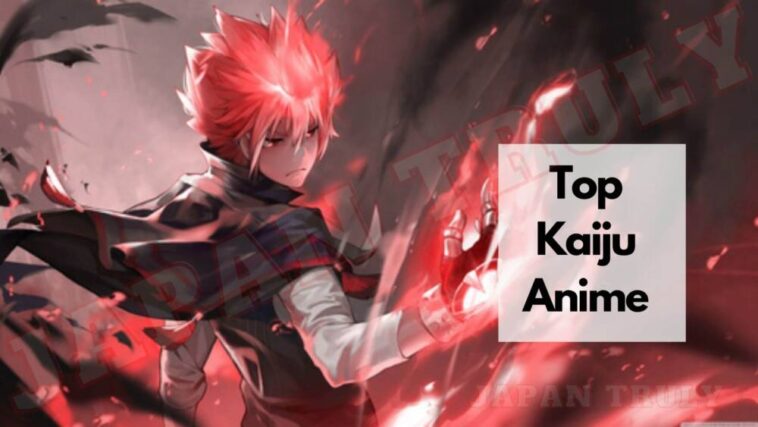 Anime is the go-to entertainment content for most people right now, especially teenagers and young adults. Anime series come in a variety of genres and themes that cater to specific demography. And one such theme we’re here to talk about today is “Kaiju”.

Kaiju is a Japanese term that means “giant monster” or “huge beast” when translated to the English Language. This means kaiju anime is a subgenre that depicts anime series with giant monstrous beings in the series as prominent antagonists or protagonists. It’s a very popular sub-genre in anime and there’s a huge fan base for kaiju anime.

Well, if you’re a diehard spectator of kaiju anime then here we have curated some of the best and most well-received kaiju anime. So hang on and check them out below!

Let’s begin with one of the popular anime series in recent times and one of my personal favorites as well. Attack On Titan is an action-filled dark fantasy anime that has a prominent kaiju theme.

The plot of Attack On Titan focuses on a post-apocalyptic world where humanity is forced to live in a confined village surrounded by huge walls to protect themselves from monstrous humanoid creatures called Titans.

All the characters in Attack on Titan have a beautiful arch!

The protagonist of Attack On Titan is a young man named Eren Yeager who witnessed his mother being eaten by a Titan.

This led him to develop immense animosity towards the Titans and hence he joined the Scout Regiment to fight the Titans. The Titans are designed to look like hybrids of humans and monsters.

Their physical appearance is made to match the muscular figures of humans. This is because titans are humans with the ability to transform into Titans. When transforming they attain immense strength, prowess, and a gigantic stature which makes them look monstrous and malevolent. (take a look at the strongest Titans on Attack on Titan)

Attack On Titan has captured the hearts of countless anime fans and my favorite aspect of this anime is that it has an engrossing storyline with intriguing plot twists.

If you’ve already watched Attack on titan, here are more anime like Attack on Titan you can enjoy!

Naruto is another anime with a large fanbase that has a kaiju theme. The plot of Naruto focuses on the life of Naruto Uzumaki. Naruto was born to Minato Namikaze who was the Fourth Hokage of the Konoha village.

When Naruto was an infant the village was attacked by a monster called Nine-Tails and Naruto’s father attempts to save the village by sealing the Nine-Tails in Naruto’s body.

Naruto grew up wanting to become a skilled ninja and he became a member of one of the ninja teams.

Since Naruto is the Nine-Tails beast host he possesses the powers of the monster such as the ability to summon powerful chakras to fight against his opponents.

The beast’s power also grants Naruto the abilities such as healing power, stamina, and longevity. With such deadly powers, Naruto is able to topple mountains, tackle countless opponents and still remain tireless.

If you love the idea of human beings possessing monstrous powers then you’d definitely love Naruto as well.

Here are the Naturo movies in chronological order you should watch

Darling In The Franxx

Children are artificially created and are forced to defend humanity while adults live in tech-savvy cities. The children are forced to grow up in isolated chambers and are taught to learn to operate the Franxx which is a massive mecha robot.

The humans are attacked by vast monstrous creatures called Klaxosaurs who are of 4 different sizes. To combat these monsters, the humans have come up with the clever idea of using artificial human beings to run pilot Franxx mechas.

To pilot these mechas, boys and girls are paired into teams. The main protagonist is a boy named Hiro who gets teamed up with Zero Two who’s a professional Franxx pilot of klaxosaur origin.

Zero Two is known for being the “Partner Killer” because she has killed all her 3 partners. She also has few physical qualities of klaxosaur and despite her qualities, Hiro still accepts to be her partner.

They both eventually develop a romantic relationship and the thrilling anime also portrays romantic elements for those who love some intimacy amidst the chaos.

Inuyasha is an adventure fantasy-filled romantic anime that portrays a wide range of monsters and beasts throughout the series hence it’s worth the watch if you’re a fan of kaiju anime. Here’s more about the characters from InuYasha

The storyline of Inuyasha focuses on a teenage girl named Kagome Higurashi who fell into a well and got transported to an ancient period. In the ancient era, she meets a hybrid human-dog called Inuyasha who seeks a sacred jewel called Shikon Jewel.

The Shikon jewel was protected by a priestess named Kikyo and Kagome happens to be Kikyo’s reincarnation and the Shikon Jewel is part of Kagome’s body now.

When Kagome gets attacked by a crow demon the Shikon Jewel is released from her body and she hits an arrow at the jewel causing it to shatter. The shattered parts of the jewel are scattered across parts of Japan.

Now, Inuyasha and Kagome are forced to find the shattered parts of the jewel before various monsters and demons get hold of them and use them to achieve their malevolent desires.

Since Inuyasha is a fantasy anime there are various creatures such as demons, monsters, and deadly beasts being portrayed throughout the anime series. Inuyasha also has a romantic aspect to it which most youngsters would love to witness.

Follow this watching order for InuYasha to properly enjoy the anime!

Hellsing is an action-filled dark fantasy anime series with a vampiric theme to it. The plot of Hellsing focuses on a secret organization called the Hellsing Organization which is an organization that looks for fatal creatures like vampires, ghouls, and demons that wreak havoc across England.

The Hellsing Organization was run by Sir Integra Fairbook Wingates Hellsing who’s the daughter of the previous chief of the organization.

As a child, she witnessed her father getting murdered which made her extremely furious and vengeful to avenge her father’s death. Integra is protected by the most powerful vampire named Alucard and a Hellsing family butler named Walter Donez.

When crimes increase across England, Integra learns that a part of the Nazis has formed a group called Millenium which is seeking to wage a huge scale war by releasing a huge army of vampires in order to reform Nazi Germany.

The anime series portrays deadly and brutal battles between the vampires and humans. The action sequence between the groups and the themes of kaiju are prominent throughout the series which most anime fans would love to watch.

Neon Genesis Evangelion is an apocalyptic mecha anime that focuses on a post-cataclysmic era where the futuristic city of Tokyo 3 has organized a paramilitary force called Nerv to fight against Angels which is a group of gigantic monstrous creatures that seek to cause more catastrophe.

The protagonist Shinji Ikari is summoned by his father to learn how to pilot Nerv’s Evangelion bio machines.

These machines are synchronized with the pilot’s nervous system to attack the Angels who are a fatal threat to humanity. Initially, Shinji pilots the Evangelion without any practice and kills an Angel ultimately.

Later Shinji is able to pilot the Evangelion machines with the help of his friends Rei Ayanami and Asuka Langley Soryu. Together they form a team and battle against the Angels killing most of them in battle.

Neon Genesis Evangelion is an anime that has a large fanbase for its captivating characters. It has an intriguing storyline with a subtle combination of futuristic aspects and a kaiju theme.

If you’ve already watched it, here are more anime like Neon Genesis Evangelion

What defines a kaiju?

Kaiju is a Japanese term that’s used to describe science fiction characters like beasts, monsters, and ghouls. When translated to the English Language the term “Kaiju” means giant monster or strange beast. A kaiju can be the antagonist or protagonist of a story plot and they can also be a neutral or side character as well.

Is there a kaiju anime?

What are Japanese monsters called?

Japanese monsters that appear in anime series or movies are called kaiju. The word Kaiju translates to beasts or monsters in the English Language. The kaiju monsters are sometimes the protagonists or antagonists of an anime or manga series and they possess a great set of immense prowess.

Titans are the most prominent figures in the Attack On Titan anime and manga series. Kaiju is a Japanese term that translates to strange beasts or monsters in English. Titans can be considered kaiju because they are gigantic monstrous creatures that possess partly characteristics of monsters. Although Titans are humans who transform into Titans they lose all their human emotions while transforming and hence they can be considered kaiju.