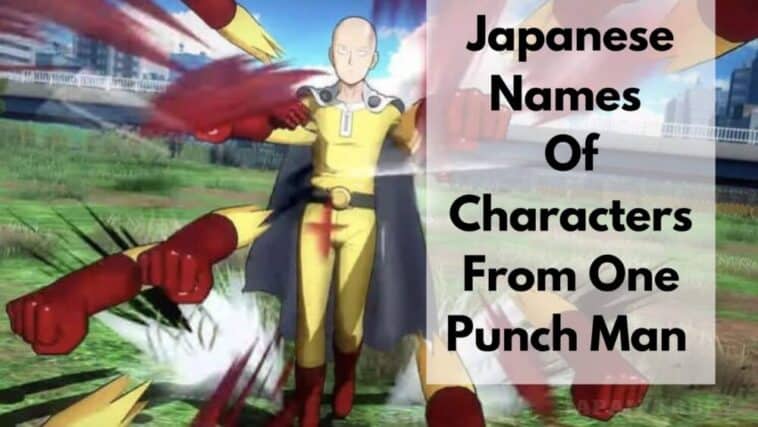 Wanna know the original Japanese names of characters from One Punch Man? Here’s a complete list of all the characters’ names in Japanese and what they mean!

One Punch Man is regarded as one of the best-selling manga. It is the perfect mixture of action and comedy. If you love watching an overpowered hero take over the world, then this is the anime for you!

It is created by One and illustrated by Yusuke Murata. The webcomic started in the year 2009, and since then it has been adapted into manga, anime, and movies.

The manga chapters are periodically compiled and published into individual tankōbon volumes. There are two seasons, consisting of 24 episodes in total. The third season is yet to come.

It revolves around a superhero who can defeat any enemy with just a punch. He tries to find challenges but gets bored when no one turns out to be as strong as him. Overall, it received applause from the critics. Without further ado, let us learn more about the Japanese names of the characters from One Punch Man.

Japanese Names Of Characters From One Punch Man

Saitama is the main protagonist of the series. He is a 25-year-old bald man who has the power to take over the enemy with a single punch. He is bored and is looking for a challenge. He says that he became a hero for the fun of it. His main power is strength.

Other powers include speed, stamina, and durability. He breaks all the possible physical records there are.

His world turns upside down when he enters the Hero Association with a score of 71. It turned out it was the lowest rank because he failed the mental exams.

Throughout the series, he proves himself to be a better and more worthy person by doing good deeds. He defeats various villains like Speed-o’-Sound Sonic, Deep Sea King, etc.

In the Dark Matter Thieves’ story arc, he showcases his “serious punch” while defeating the world-conquering leader of the aliens, Lord Boros. He ends up forming friendships with Mumen Rider, King, Genos, and Blizzard.

In the association, he gets the name “Bald Cape” (ハゲマント, Hagemanto, Anime: Caped Baldy). In the current arc, he is A-class rank 39.

Another main character in the series is Genos. He is a 19-year-old cyborg who has had a painful past. He ends up becoming Saitama’s believer after he sees him fight the Mosquito girl and win. Before the storyline started, Genos went through a traumatic experience.

Four years prior, his family was killed by an angry cyborg called Mad Cyborg. He was almost killed when a scientist, Dr. Kuseno, took him in and turned him into a cyborg. With great scores, he enters the Hero Association and gets an S-rank.

Whenever he has no mission to go to, he ends up following Saitama on his missions. In most cases, Saitama ends up saving Genos. In the association, he gets the name “Demon Cyborg” (鬼サイボーグ, Oni Saibōgu).

In the Hero Association, there are two classes of superheroes – A and S.

In this category, the superheroes are well trained and have got the perfect score in the examination. It also includes top students from the A-class. Apart from Genos, there are other superheroes as well.

Blast is the top superhero in the association. He has the ability to use a teleportation suit. It turns out he is a part of a group of universal guardians who are on a mission to hunt down mysterious God’s cubes.

It has been scattered all around the universe, including Earth. He is doing this to prevent people from coming into contact with the cubes. If it happens, they will be bestowed into mysterious beings by someone who claimed himself to be a “God”.

During one of the battles, Blast finally takes the God’s cube that Saitama found at the underground location of the enemies. Throughout the series, his main purpose was to get the cube. He also has a son named Blue.

After the Blast comes the Terrible Tornado at #2. She is a 28-year-old top superhero with curly green hair. Her appearance can confuse people to think that she is a lost child. Her powers include telekinesis and levitation.

She appears to be rude and has an abusive personality given she lashes out at people easily.

She also has a younger sister named Blizzard. During the Dark Matter Thieves arc, she saves a lot of people by taking an attack from the alien ship. She suffered immense damage. She also owes Blast for saving her life.

He also goes by the hero name Silverfang (シルバーファング, Shirubā Fangu). He is at Rank 3 and is an expert martial artist. His brother, Bomb, had a huge influence on his life.

When Bang was young, he used to utilize a forbidden style – First of Unleashed Explosive (爆心解放拳, Bakushin Kaihō-ken) for his selfish purposes. One day, his brother saves him and asks him to never use it again.

This is when he invents a new style – Fist of Flowing Water Crushing Rock (流水岩砕拳, Ryūsui Gaisai-ken). He then joins the association and gains an S-Rank. Thanks to his brother, Bang turns into a wise person and scolds people for being selfish.

This category of superheroes is the second strongest in the Hero Association.

Amai Mask is a top superhero who is also a model, an actor, and a singer. His personality is quite narcissistic, and he believes superheroes are supposed to be “tough, strong, and beautiful, as well as able to promptly and splendidly eradicate evil”. He has a strong hatred for evil. Moreover, he is also a part of the promotion group for any rank 1 hero to go to S-rank.

Despite being powerful, he chooses to remain in A-Class, Rank 1, so that he can prevent other members from applying to S-Rank without his blessings.

During the Monster Association fight, Amai’s secret was out. He isn’t a complete human as when his eyes stabbed at one of the enemies, his entire face was revealed. People notice that his face is made up of hard material that does not break or bleed. Moreover, it can regenerate.

He is at the bottom of the A-class with a rank of 38. He wears a jacket that has a texture resembling that of a python’s skin. He uses a hand-to-hand snake-styled fighting style. During the inauguration ceremony, he welcomed both Saitama and Genos.

Soon after, he gets irritated when none of them notice him. Out of anger, he tries to fight Saitama and obviously loses to him.

He was one of the minor heroes who was defeated by the Deep Sea King in the J-city shelter. This distracted the enemy until Genos entered and took over. He has also entered the Super Fight tournament five times. He gained popularity after he scored enough to be in top 4 every time.

He is a young karate prodigy who wears sports outfits, pairing them with high-tech running shoes. They have gunpowder stored in them and also contain boosters. He has blonde hair that is slicked back. On his left cheek, there is a lightning symbol.

See also  What Are Manga Chapters?

He is ranked 20 and was also one of the minor heroes who was defeated by the Deep Sea King. He likes to know the details about the target before fighting. He strategizes the whole plan on how to defeat them, but he is known to doubt his own abilities.

Other One Punch Man’s S-Class Superheroes’ Names in Japanese

Other One Punch Ma’s A-Class Superheros’ names in Japanese

There are other classes as well, like the B-Class and the C-Class. These categories consist of less powerful superheroes who indulge in helping civilians and fighting petty crimes. They are in the background of the story and are often considered supporting characters with recurring roles.

Japanese names of the characters from One Punch Man: FAQs 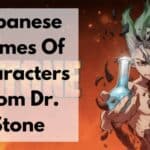