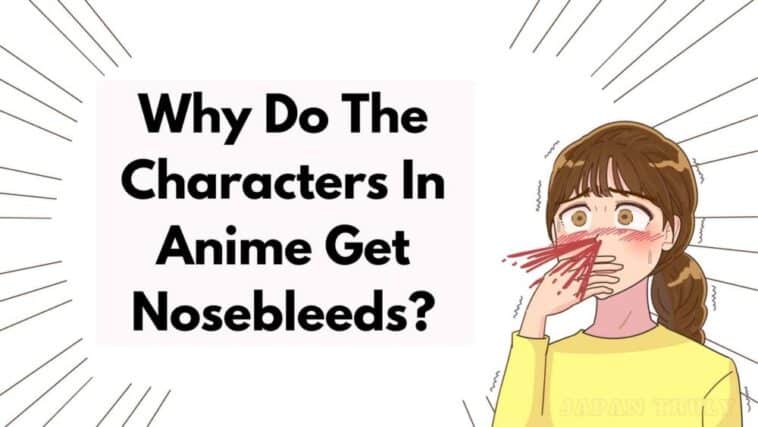 Have you ever noticed an anime character’s nose bleed? Would you like to know why anime characters get nosebleeds when they’re aroused! Get all your answers related to this topic.

If you are a die hard core  anime fan or manga reader, you have noticed that anime characters nosebleed, to represent excitement or perverted thoughts. So, why and how does this happen?

Let us dive deeper into one of the biggest cliches of all time which is the Nasal Hemorrhage or Nasal bleeding called hanaji.(鼻血). Almost every romance and comedy anime have nose bleeding scenes.

If you have watched them, you will know exactly what I am talking about. In most cases, it happens to both male and female characters and does not always mean a person is thinking nonsense or is aroused.

It can simply indicate embarrassment and other reasons, which we will be discussing in this article.

Why Do Anime Characters Get Nosebleeds?

Meaning Of The Term Nosebleed In Japanese:

The word for ‘nosebleed’ in Japanese is Hanaji 鼻血, let us break down the term. The word hanadi can also be pronounced as hanaji because diぢ and ji じ sound very similar in the standard Japanese language.

To give an example of a sentence:

Where Does This Nosebleeding Cliche in Anime Come From?

The cliche comes from an old wives’ tale that when an adolescent is filled to the brim with hormones and watches something arousing, their blood pressure rises to the point that it causes a nosebleed.

Mangaka Yasuji Tanioka, a famous Manga artist was the first to introduce nose bleeds with the hit 1970s manga  ‘Yasuji no Mettameta Gaki Dou Kouza.’ From there, other manga and anime artists liked the expression and began replicating it in their own work.

Usually, its usage is accompanied when a character looks more attractive than normal or by a panty shot.

Some manga and anime artists find the nosebleeds funny, while some claim that the cliche came about because in the past expert fighters made tiny cuts on the forehead to build up tension during a match.

Others claim that it is sexual arousal caused by  an increase in the blood pressure, which in turn triggers a nosebleed.

Perhaps, the creators have the same idea of creating this exaggeration and representing that feeling. But, there isn’t any story behind this cliche of bleeding your nose because of excitement in anime.

Real Reason Behind Why Anime Characters Get Nosebleeds?

All the characters in anime are highly admired by people not only in Japan but all around the globe. They are very stylish and hot as they have different colored hairs, green or blue eyes and fair skin.

Many series and movies in anime have young male and female characters with nosebleeds in many scenes with the blood seen dripping from their nose.

If you are an anime fan, and going absolutely crazy to know the real reason why these  anime characters get nosebleeds, then let’s break it down once and for all.

According to animation historian Nobuyuki Tsugata, a  bloody nose is not often associated with sexual excitement. In anime, it’s common for characters to have a red drip on their nose when they are aroused.

Tsugata says it has  become a widely accepted form of sexual expression in anime simply because it is a form of communication.  Excitement, just like any  other emotion, is something that we  experience in our hearts.

In order to express an anime character’s inner feelings, physical symbols are used. Nosebleeds are an exaggeration of that excitement which is very easy and comical for children to understand.

But in real life, there is no direct connection between sexual arousal and bloody noses.

According to Dr. Kouichirou Kanaya, an expert ear, nose and throat specialist; there is no evidence for any sex-caused nosebleeds on a scientific level. While there seems to be an increase in heart rate and blood pressure caused by sex, there si no direct connection to nosebleeds.

According to research, men who take performance enhancing drugs during sex like Viagra can get nosebleeds becasue of the increase in the blood flow. So, what we see in anime and manga could be a perfect and healthy way to express pent up hormones of both men and women.

So, how is possible to get your nosebleeding from sexual arousal? The common causes are nose picking and being exposed to dry air for a long period of time.

Another reason is the fact that they are common during winters and high blood pressure is usually a cause for nosebleeds. There is evidence that suggests people who have gotten nosebleeds from having over zealous sexual relations.

Now that we know the reason behind why our beloved  characters get nosebleeds, let us take a few popular examples from hit manga and anime series.

From older naimes, Dragon Ball Z was the prime example of this nosebleeding cliche. Master Roshi is a great example because he gets a lot of  nosebleeds  from Bulma’s flashing which was funny to watch.

He is usually the character that comes to mind when someone thinks about nose bleeding and anime series.

Another beloved show is Pokemon where Brock serves as the best example. It was hard keeping up with his never ending crushes, but he was someone who got a  nosebleed in quite a large amount.

While most nosebleeds are depicted in a normal red color, many times white steam is shown instead especially for smaller audiences. It was supposed to depict general excitement rather than sexual arousal.

Many times, blood was censored for the international audiences and white steam was shown for Brock.

Another example is from the hit show One Piece where Vinsmoke Sanji fascinates women and a gentleman. He almost dies on Fishman island from touching the mermaid which was totally absurd and unexpected.

Yuri Yuri’s Chitose is notorious and gets nosebleeds when she fantasizes about her friends Kyouko and Ayano getting together.

An extreme nosebleed example is karin Maaka from Chibi Vampire who has some of the heaviest nosebleeds in anime history. She is a reverse vampire that produces an excessive amount of blood rather than craving it.

She mainly targets unhappy people and as soon as she bites them she gives them an injection of her blood which in turn brightens their moods.

What are some of the causes for nasal bleeding?

Nasal bleeding can be caused due to a number of reasons-too cold or dry air, blowing nose very hard, hurt nose, irritation due to colds, allergies, sneezing or sinus problems, chemical irritants, deviated septum, and excessive use of decongestant nasal sprays.

Can you actually get a nosebleed from arousal?

According to Dr. Onishi from Onishi Internal Medicine Heart Clinic (OIMHC), when you are aroused, your blood pressure and heart rate will be high and will have nothing to do with your nose and ears.

Name some of the popular anime series which use nosebleed scenes?

Many anime have nosebleed scenes, including Baka and Test, Dragon ball, Naruto, One piece, charlotte, Gurren Laggan and Punchiline.

Why are nosebleeds prevalent in Japanese anime?

Manga and anime characters have nosebleeds  as a physical symbol to indicate their feelings. Usually when they are thinking perverted things, a nosebleed shows up as a simple way to make their thoughts easy to understand for the viewers. Just like you do not really pop veins all the time or smoke comes out of your head when you are angry or nobody really drops a sweat on their face when they are feeling slightly pressured.

Why is nose bleeding associated with perversion in anime and cartoons?

Japanese comics and anime frequently use visual shorthand for sexual arousal. It is a playful interpretation of sexual feelings to the audience, considering anime has a large audience of children below eighteen year sold. Alos, it’s a long-standing Japanese folk belief that a nosebleed is more common in men than in women.

To sum up, the main reason behind anime nosebleeding is to express the ‘exaggeration of excitement’ of an anime character. So, it has nothing to do with health or science and more of a very unique way to express feelings. Nose Bleeding scenes are very common in anime series. Sometimes, it can be a tad much but lets face it. All these characteristic oddities of anime are very basic and standard. That’s the reason we love to read and watch  anime and manga. It never fails to impress us and make us want more. 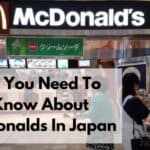 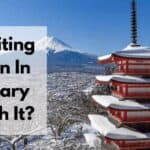