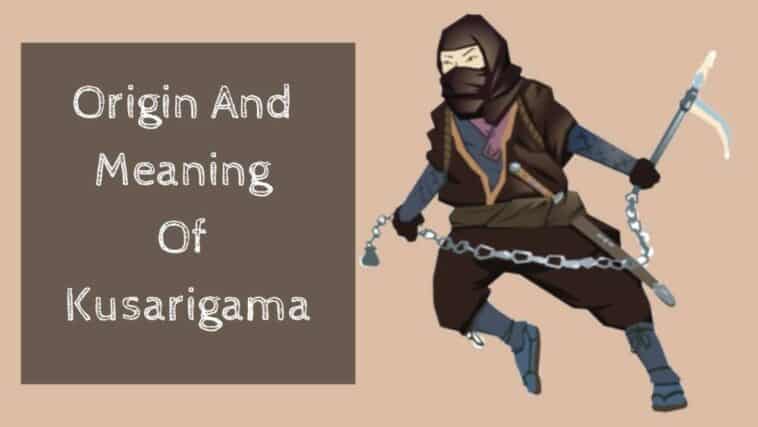 Are you curious about the origin and meaning of Kusarigama? Read on to know more about this Japanese weapon. You might be surprised at what you learn!

We all have heard about Japanese weapons, but what about the kusarigama? Want to know more?

If you have watched any Japanese movie, you may have seen a character using this weapon which is nothing but an ancient traditional weapon.

This traditional Japanese weapon consists of kama (sickle) on a metal chain (manriki) along with a heavy iron weight at the end.

The art of handling the kusarigama is called Kusarigamajutsu is difficult to master, which features a set of techniques using the sickle and chain, ranging from disarming the opponent from a distance to direct attacks.

What is fascinating is that this was a weapon carried by the farmers during the feudal era of Japan, and there is so much more to it than we know.

So, without any further delay let us dive deep into the kusarigama, its origin, how to use it and its role in anime and manga

Origin And Meaning Of Kusarigama

Kusari means chain [鎖] and Kama [鎌] was originally a farming tool, a short form for the sickle.

Together it forms the Kusarigama [鎖鎌], designed with simple working tools that were mainly used in Okinawa to bypass laws against carrying weapons in medieval Japan.

At the end of the chain, a heavy iron weight is attached to enhance its use of a hooking weapon.

The length of the chain is around 1000-4000mm. The methods of use were so vast and it was used by the ninja warriors for self-defense.

However, it was originally used by merchants, craftsmen, and farmers who were not permitted to have a samurai’s sword.

The ninjas liked it because this weapon could be concealed easily inside their clothing and it was the right weapon for those ninjas with superior ability in body use.

Origin of Kusarigama in Japan

According to Old School: Essays on Japanese Martial Traditions by Ellis Amdur, there is a story about the origin of the kusarigama.

In the story, a samurai attacked a farmer who used a farming sickle to cut his rice plants. The farmer used the sickle with a chain attachment to defeat the samurai.

Even though the Kusarigama was famous during the Edo period, it was believed to have been created first during the Muromachi period.

As mentioned before, the kusarigama is a famous ninja tool and weapon but was developed by ordinary blacksmiths for the farmers who were prohibited to possess a samurai sword.

According to researcher Nawa Yumio, the kusarigama was based on the tool jingama which resembles a sickle.

It was used to cut a horse’s ropes in case of a fire and could be used as a weapon along with a konpi which is a chain with a weighted end and a chain around the user’s wrist. People would use it to protect their horses against thieves or criminals.

The popularity of the kusarigama increased during the 12th century in Feudal Japan. Records show that many schools were established around this time to teach the art of handling Kusarigama.

One of the oldest and best-known schools of Japanese martial arts is taught in Kohga Ha Kurokawa-Ryu.

A notable example of both the use and misuse of this incredible weapon is the story of the great kusarigama teacher Yamada Shinryukan during the 17th Century.

He was known to have killed many swordsmen with the use of the Kusarigama until one day he got lured into a  bamboo grove by Araki Mataemon and was unable to swing the chain and trap Mataemon’s sword because of the terrain, and was thus killed.

History also depicts another famous historical user of the kusarigama-Shishido Baiken during the Edo period.

He was a swordsman with proficient skills and was an expert with the kusarigama, but was sadly killed by the legendary Samurai Miyamoto Musashi.

He was portrayed greatly in the Vagabond manga, which sold more than eighty-two million copies worldwide. He also appeared in other video games too.

There are different kinds of kusarigama:

There are several uses of the kusarigama. You can aim for the opponent’s face, head, shin, or gauntlet by striking him with chains.

Attacking with this weapon entailed swinging the weighted chain over the enemy’s head in a large circle and then whipping it forward to entangle an opponent’s sword, spear, or any other weapon, thus immobilizing his arms or legs.

This allows the kusarigama user to easily strike with the sickle and give him a final blow.

A kusarigama wielder can even strike an opponent using the spinning weighted end of the chain directly, while still outside the range of the opponent’s sword or spear causing some serious or deadly injury.

It is often employed as an anti-siege weapon, and the chain allows the weapon to be retrieved to the user only after it was thrown downwards at an opposing force.

There are also a number of fictional accounts that depict users swinging the sickle with the chain, rather than the weighted end.

However, this is not the proper use of the weapon, as the sickle will bounce off a target without causing many injuries.

So, it was mainly invented and used by the farmers for self-protection with an aim of containing and restricting their enemy’s movement.

Today, people can learn Kusarigama-Jutsu in many ways, such as martial art, as entertainment or sport.

In Ireland, the kusarigama is classified as an illegal weapon and the use of it can result in imprisonment for up to seven years.

We can find this weapon in several films, manga, anime, games, and so on. It was always believed to be used by ninjas so this weapon is usually given to ninja characters in works of fiction.

A few examples of the kusarigama in fiction and popular culture include:

Origin and meaning of Kusarigama: FAQs

What are the strengths and weaknesses of the Kusaigama? 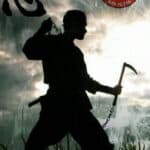 The strengths include:
It is moderately fast
It is useful for a large group of enemies.
It can be used for both short and long attacks.
The weaknesses include:
It is a medium-strength weapon
Some attacks are quite slow.

What are some of the other ancient Japanese weapons?

To summarize, we can say that this weapon is definitely a silent but powerful Japanese weapon.

It is quite funny that a peaceful country with a safe reputation has such a weaponed, violent heritage.

Nevertheless, these ancient weapons consist of simple working-class tools but showcase the creative imagination of the people.

The Kusarigama is a force to be reckoned with and it is weapons like this that continue to spark our interest in ancient Japanese battle culture.

By understanding its history, uses and types a little bit better, we are given a taste of the rich culture of Japan.

If you wish to experience the life of an ancient  Japanese warrior, then you look at some of the places that offer this and learn even more about the ancient Japanese weapons and techniques, and if you are lucky, take part in a mock battle.

I hope you enjoyed reading the article. Do not forget to share it. 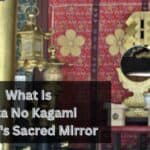 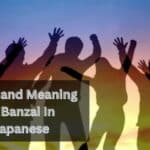