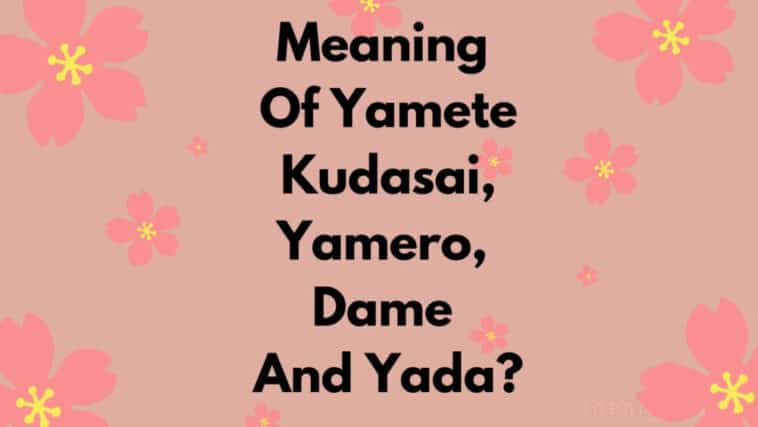 Here are some common words and phrases you should know in Japanese. In this blog, we’ll talk about the meaning of yamete kudasai, yamero, dame, and yada?

Every language has its own characteristics that set it apart from others. When it comes to Japanese, the internet serves as a repository for a great number of slang terms and expressions. Yamete Kudasai is one of the most well-known.

You’re probably familiar with this word if you’re a fan of manga or anime. If you are one of the people who have looked it up on the internet, then you should not be concerned because we are going to explain what it means to you.

In addition to this, you will become familiar with terms such as yamero, dame, and yada. Although the vocabulary is vast, these are the words that are most frequently used and sought after. Let’s see and understand what the words mean.

Let’s delve a little deeper into the history of the word’s origins before we dive into the dictionary definition of what the word actually means.

There are two words that you need to keep in mind, and those words are Yamate and Yamero. Both of those phrases are variations on the verb yameru [止める]. The word means to stop, cease, abandon, give up, cancel or leave.

The Japanese word yamete (止めて) literally means “Stop,” and it can be interpreted as “please stop,” “I can’t take it anymore,” “that hurts,” and other similar expressions.

Regarding this word, it tends to take on a more feminine tone. It is used in extreme circumstances, such as when a woman is in danger of being attacked. If you are familiar with anime or manga and the elements that make up either of those mediums, you will have an idea about what we are talking about.

On the other hand, Yamero has a more masculine appearance. It is utilized in times of conflict, struggle, and frustration, specifically when one is attempting to stop something from taking place.

Both the word yamete and yamero come from the same ideogram (止), which means to stop. However, you should be aware that there are several different verbs for the various connotations of the word “stop.”

LEER  Guide To Montsuki Traditional Costume For Men in Japan

For instance, tomeru (止める) means to stop while one is moving, whereas yameru (止める) means to cease and interrupt an action that is currently being performed. One more Japanese character, [], also denotes the concept of stopping, and its reading is very similar to that of [留].

When the girl uses the expression “yamete kudasai,” it gives the impression that she is pleading with you to stop and asking nicely. This is without a doubt the most powerful phrase among those that we are going to discuss in the following paragraphs.

One of the Japanese words that you will encounter frequently in both spoken and written contexts is Dame, which can be written as だめ in hiragana, ダメin katakana, or 駄目 in kanji. Dame literally means “mistress” in English.

Although “Not Good” is the most common interpretation of dame, this word can also mean “no,” “bad,” “stop,” “not allowed,” “useless,” “hopeless,” “wasted,” or “ruined,” depending on the circumstances.

This word can be used in a variety of contexts, including to decline any offer, to scold children, and in more extreme circumstances, such as yamete kudasai in adult animations.

You can say No in Japanese in two ways – Formally いいえ (iie) or the more casual ううん (uun). To emphasize this more, you can use dame. Let us see some examples.

It is essential to keep in mind that dame is a significantly more emotionally charged word than the typical words for “iie” and “uun,”.

It is generally acceptable to address someone as dame when you are in an informal setting with people you are close to or with people who have the same social standing as you (although very direct).

Examples of Dame as something “not good”

I can’t do it tomorrow; I have other plans.

I tried over and over again, but the key won’t fit in the keyhole…I guess it doesn’t work after all.

My boyfriend is not any good at cooking.

Examples of Dame in the context of giving a description

He’s really hopeless, as he does nothing but drink day after day.

You cannot eat or drink in the classroom.

You cannot eat or drink in the classroom.

However, if you use it with people with a higher social status, it may come across as overly dramatic and rude, so you should exercise caution when doing so.

Because of this, you should try to avoid the usage of the word dame (which literally translates to “no”) whenever you are talking to an authority figure such as your boss or teacher.

Yada is a Japanese word that literally translates to “no chance,” “unlikely,” “no way,” “failure,” and “weak point.”

Some people will use this word to express their disapproval of an offer or of someone who is trying to do something to them, such as grab them or kiss them, or when something goes wrong.

When the person is on the verge of giving in, it is sometimes appropriate to use it in a way that is light and unimportant.

The word “kure” added to the end of “yamete” does not alter the meaning of the phrase, but it does alter the tone of what you are saying. Because this is the typical way that parents tell their children to stop doing something that is inappropriate for them to be doing, the word “yamete” carries the connotation of a reprimand when it is used.

Because it adds more feeling to a statement, using “yamete kure” is an effective way to establish the tone of an order. As if he were upset about something, angry, or reprimanding someone for doing something wrong.

On the other hand, Yamete Yo is also one of the variations of Yamete. In contrast to kure, “yamete yo” has a friendlier, less sentimental tone that never implies any form of reprimand or anger. This tone of voice is typically associated with women.

You are familiar with yamete and yamero from what you have read. Yamero and Yamenasai are two other words that could potentially cause you some confusion. Let’s get a better understanding of the meaning of these two terms. Let us recap first.

やめて (yamete) is used between friends. When speaking to someone who is significantly younger than you, you may use this word. This word can be used in a lighthearted or solemn manner, depending on the context.  This is primarily used by females.

On the other hand, the word yamero (ya) is typically used to convey an air of seriousness.

Both are comparable; what differentiates them is the tone in which they are delivered: harshly or seriously. This word is typically used in a joking and lighthearted manner by young men. It is typically employed to strike a humorous tone.

It can be said that やめなさい  (Yamanashi) やめてください. and are interchangeable terms.

There is no doubt that the Japanese language is exceptional. Yamete kudasai, dame, and yada are three new words whose meanings we have discovered today. The meanings of all three words are essentially intertwined with one another.

The word “Yamete Kudasai” has a distinctly feminine tone to it and means “to stop, cease, or abandon.” The word yada means there is no chance or failure, while the word Dame means “not good.”

There are numerous permutations of the words that can be used. Everything depends on how you put it to use. The difference is important to understand because it can have a different connotation depending on the context. It can be expressed in an informal or even a more formal manner. Use your words wisely!