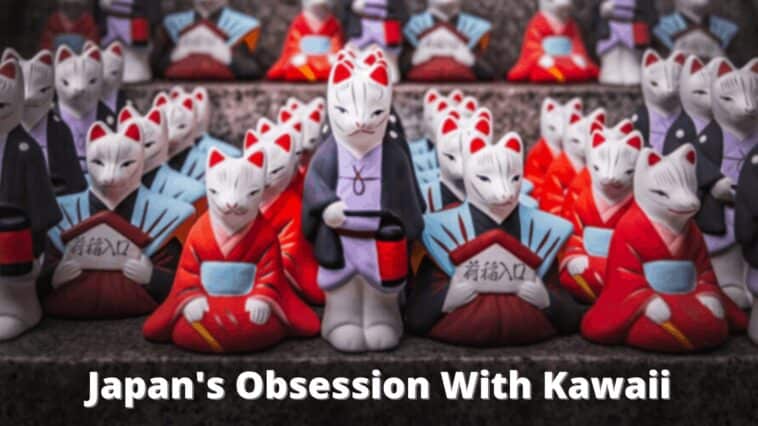 Are you wondering what is the reason behind Japan’s obsession with Kawaii? Well, I will tell you all about it here!

Kawaii is not just a fad in Japan, in fact, it is embedded into the social and cultural fabric of the country.

Why is Japan obsessed with Kawaii?

Japan’s obsession with Kawaii brings some sort of peace and calm in the people’s mind and has actually boosted the local economy of Japan by producing endless Kawaii products in the market. This trend has also become important in Japanese culture as the government is looking to export Kawaii goods overseas.

So, let’s get into the details of why Japan is obsessed with Kawaii.

All things are glittery, mushy, fluffy and soft. Who wouldn’t be swayed by something you want to love but smush at the same time.

Keep reading to find out everything there is to know about Japan’s vividly captivating obsession with kawaii.

Where Did the Word Kawaii Come From?

When you hear kawaii, you think cute, cute and cuter with undertones of endearing and adorable. What you don’t know is that kawaii doesn’t always mean cute. This is the popular culture, modernised version of the meaning to help it from backfiring in society.

It’s origins go back to the Taisho era, where it reveals a darker past. Derived from kawo-hayu-shi, it actually meant to be face flushed. It refers to feeling awkwardness, embarrassment and shyness in situations.

The Japanese culture perceived women as cute only when they were shy, demure and depicted childish identity. While that was the basis of the origin, the society began to embrace the childlikeness of the woman and began to think of it as endearing.

With time having passed by, the meaning of the word began to translate as cute and loveable. This word-morph comes from a phenomenon called baby schema that encompasses a set of physical features that includes having a round face with a large head and big eyes augmented by chubby cheeks.

This sort of physical appearance drives a caretaking behaviour in a  human being since it is perceived as cute and cuddly. It is almost irresistible. Young humans, or younger(and cute)  looking humans depend on other humans for care.

The kawaii culture is baby schema underneath it all because the depiction of women as cute while embracing their childish identities seems to be the only way they appear desirable.

With that philosophy behind it all, the Japanese have incorporated it into all their products, at least everything that’s culturally ‘kawaii’ in the current market to make it automatically appealing to all, hence explaining Japan’s obsession with kawaii.

But before we unravel the darker sides of all things kawaii, let’s get into why it’s everywhere in Japan.

Why is it so popular in Japan?

It can be quite surprising, but a lot of why kawaii is so popular in Japan is related to the work lives of the Japanese people. The work culture can be quite rigid in terms of deadlines, formality, and can bring an enormous load of social pressures.

There was a estudiar conducted by Hiroshima University in Japan to understand the unclear effects of kawaii items on people, especially in regards to workplaces. The students were subjected to multiple tests that helped determine the effect of cute pictures on their performances.

One of the experiments involved students to play a game similar to Operation to test students’ fine motor dexterity skills. The students were made to play the game twice, before and after viewing cute pictures of puppies and kittens. Believe it or not, there was an average improvement of 49.3% in the performance in terms of productivity, accuracy and concentration.

Another experiment required the students to do a visual search of different sized letters before and after viewing the cute photos. Post viewing, there was a 15.7% improvement in performance. Such results suggest that the images had an effect on their attention to detail and focus.

One of the findings stated that these cute photos instigated the caregiver instincts in the viewers minds, making them switch to focus and attention mode, resulting in better productivity. This acts as a validation for the whole baby schema phenomenon detected in Japan’s obsession with Kawaii.

In any case, Japan’s work culture is very demanding and to have cute, kawaii things around you can act as a momentary escape from reality and this cuteness-triggered emotional elicitor actually induces productivity-boosting tendencies at their workplace.

Naturally, that’s not the only reason. The general mentality of the Japanese reflects a strong resistance to grow out of their 12-year old childlike self, unwilling to adhere to strict social norms.

Since the children in Japan are highly regarded and always taken care of, I suppose there is some part in all the Japanese people that wants to be taken care of and have their childlikeness embraced.

The sexism in kawaii may not be very apparent, but the need to depict a woman as needy, innocent and cute looking to be wanted reflects badly on where Japan stands in terms of the country’s respect for a woman. Japan is ranked really low when it comes to being a suitable country for a woman to live in.

Some might argue that men like kawaii, even in business mascots, so what is wrong with women wanting to be cute. That raises larger questions of gender imbalance and women empowerment.

The whole Kawaii culture promotes something called a performative cuteness, in order to be liked. This reflects badly on women trying to be something they are not. Japanese culture expects women to be shy, cute, soft-toned, etc. This, in addition to social stigmas requiring women to be kawaii, feel kawaii, creates a hurdle on their career paths.

Why is Kawaii Famous in Japan?

Kawaii means cute and childish which is often not seen in a good way especially in western countries. In Japan, it’s normal to be cute and relate to mascots and cartoons like powerpuff girls, anime etc. Many people as old as 50-60 years are also into Anime which is considered normal yet Kawaii.

The Kawaii culture was started as a way to escape stress related to school, work etc. It’s a way that brought peace and calm to people as Japan has an extremely strict and formal work culture.  Kawaii was used as a fashion to express oneself in an artistic fashion.

People dress up formally all along their life for work and school and kawaii culture gives them a freedom to dress and behave differently. Nowadays Kawaii is also present in work culture where companies have their own mascots.

The Emergence Of Kawaii In Businesses

The kawaii-ness of it all is not just visible in clothing, accessories etc. It has extended to all businesses. Electronics, medical supplies and even the food industry. To integrate the Kawaii factor into their business strategies, these brands use pastel shades, cute mascots and animated imagery on their labels, logos, billboards and advertisements.

Some stellar examples include McDonald’s packaging style during holiday seasons and promotional activities in Japan. They use manga characters and pikachu and other pokemon on the packaging.

To embrace the cherry blossom season (aka Sakura) in Japan, foreign brands are bringing in their variations of Kawaii to increase sales. Starbucks started selling Sakura latte with springy notes and blue and pink konpeito (sugar) coated rice toppings.

Hello Kitty, inspired by a British bobcat, took the world even by a storm and became a pop culture icon by the 1970s. The cute whiskers and red bow just placed on the head makes its cutesy charm irresistible.

In fact, the Keio Plaza Hotel in Tokyo has 7 rooms dedicated to the kawaii-ness of Hello Kitty. From the little bow on the peephole at the door to the wallpapers, the room decorators have left no stone unturned. This is one of the main reasons for Japan’s obsession with Kawaii. Check out the official hotel website here- Keio Plaza Hotel.

One of the biggest kawaii culture icons, Hello Kitty, plays a major role in the reason behind Japan’s obsession with kawaii. When CEO of Sanrio, Tsuji discovered that the most sold items by the company were those that had cute little flowers on them. He immediately called for a cartoonist to design characters for his products.

Sanrio brought out more kawaii characters such as the Gudetama, a depressed and lazy egg that talks in speech bubbles and depict relatability in everyday life rigmarole.

The gudetama is a wordplay from gudegude meaning lazy and lacking energy and tamago meaning egg. The artistic cuteness is what makes it so kawaii. You can view their kawaii products on the official site- Sanrio.com.

Some Other Kawaii Things

Another thing you should know about the Japanese, they are very big on gift giving and hospitality. It stems from the culture of omiyage where you bring back a souvenir or any sort of gift for your coworkers and friends upon getting back from a trip.

In fact, it is frowned upon if you don’t. People go through a trying time and spend half their trip trying to find the perfect omiyage. Traditionally, omiyage refers to brightly colour wrapped snacks and food, but it can be anything. Especially kawaii!

Below you’ll find a list of a few things I curated for your friends at work, or your little nieces and nephews to heed to their obsession with kawaii. These cute stuffs are the reason for Japan’s obsession with Kawaii.

This kawaii kitten illustrated rice bowl is unique. It also features a delicate design inside. So whether you choose to store the rice bowls on your rack upright or upside down, all you’ll see is a heartwarming kitty smiling back at you.

This adorable tote bag features the famous Shiba Inu of Japan. Stay eco-friendly and make everyone around you the same by gifting this eco-friendly reusable tote bag. Japan’s obsession with Kawaii cannot go without Shiba the dog!

What is kawaii culture in Japan?

Kawaii is a culture of “cuteness” in Japan. It has become extremely popular in recent times especially in pop culture, entertainment, clothing, toys, and even in personality and mannerisms. Kawaii essentially means lovely, cute or adorable. The Japanese now look for the Kawaii aesthetic in anything and everything.

Yes, the Japanese people love kawaii as it brings a kind of calm and peace to everyone’s mind and also has boosted economical growth by selling endless kawaii goods. Kawaii is now like an identity of Japan and the government uses this culture to export goods to other countries.

Is kawaii culture spreading from Japan to other countries?

Yes, the kawaii culture is rapidly spreading to other countries. The Japanese government is taking initiatives to produce kawaii products and sell them overseas. A lot of people from other cultures are watching Japanese shows, anime and movies and following the Japanese culture where they find Kawaii a really attractive concept.

Even though Kawaii has initiated a lot of sexism in Japan, if taken positively, it has only made the country cuter. With plush soft toys, anime culture, Hello Kitty and other stuff, Japan is one of the quirkiest and the cutest country around the globe and I am certainly proud of this fact! 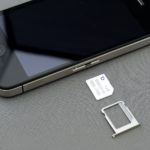 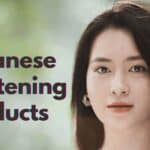